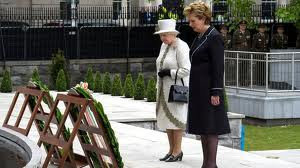 I don’t usually think of women in their eighties wearing no clothes, but RTÉ’s Tommie Gorman had a programme on last night which forced me to. It started off with Luka Bloom, brother of Christy Moore, singing a song called ‘The Seed Is Sown’.  It wasn’t about seeds at all, it was really about the visit of Her Majesty Queen Elizabeth II to Ireland earlier this year. The camera came away from Luka and there we were again in the Garden of Remembrance on that day in May, Queen of England and President of Ireland side by side, heads bowed in memory of men executed nearly a century ago by the British Army.
The no-clothes bit? Well it’s the Emperor thing, innit? Or in this case Empress. The entire media world, as far as I can tell, sees this heads-bowed moment and the visit in general as terribly, terribly significant. That and Her Majesty using that bit of Irish at the banquet. Why? Because it signals a “flowering” (D Cameron’s word) of real friendship between our two islands. It puts the cherry on the cake that celebrates the end of centuries of cruelty and conflict.
Eh? Am I missing something? Is Ireland now an independent country? Has Westminster handed back financial and foreign-policy control to the Irish people? Have 5,000 British troops gone home for Christmas and stayed there? Is the map on the BBC’s Newsline 630 about to change its Isle-of-Man shape? Because that’s what I was under the impression was the source of the centuries-old conflict between our two countries – that Britain continues to exercise jurisdiction over a part of Ireland. How did Her Majesty, fully-clothed or otherwise, standing with bent head for a few seconds, change all that?
Don’t get me wrong – I’m not a party-pooper, nor do I wish to drizzle let alone rain on anyone’s parade. But if we’re all going to sink with a contented sigh into a pink cloud  of fantasy, where optics count for more than awkward facts, we’re never going to solve this thing.

20 Responses to For God’s sake put on your clothes, Ma’am