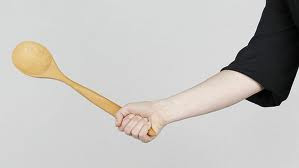 So –  Frances Fitzgerald, the Minister for Children in the south, is considering an outright ban on the smacking of children by their parents. Me, I’ve done more punching than smacking. I’ve punched priests, lawyers, teachers and even a nun or two. And been punched back. At the time of punching, I should add, we were all under fifteen  so no court cases ensued.

My parents smacked me, only we called it “hitting”.  My father kept a stick propped behind a picture of the Sacred Heart in the kitchen. He rarely used it but the threat was there, every time you looked up from  your porridge or bacon and cabbage. My mother normally used the flat of her hand when tried beyond endurance (it happens when you’ve eight children), but occasionally would reach for the nearest implement. Sometimes a clothes hanger, sometimes a hair brush, sometimes a wooden spoon.
At school, slapping was an integral part of education.  A short leather strap was applied to the open palm, held out from your body. Four slaps you got off lightly, six was tough enough, ten was rare. In addition, you could expect to get a slap across the face, or several slaps, usually for poor work. I had an Irish teacher who encouraged me to love my native tongue by gripping a fistful of my hair (I swear I once had it) and shaking my head from side to side. As my desk was beside a radiator, this sometimes involved a clang-thud sound.
Here is where I should say “And it never did me any harm” but I’m not totally inane. I firmly believe – have done all my life – that smacking children is both stupid and cowardly. You get people who say “But I was tried beyond endurance!” and having taught teenagers for ten years and helped rear four children, I know what they mean.  However, on the one occasion I did smack a child (my own, as it happens), I immediately felt so ashamed I never repeated it. People who smack children,  be they parents or anything else, are cowardly (would they do it if the child was 6ft 2 ins and weighed 14 stone?) and stupid (do they really believe that thumping people makes them better?).
In the south of Ireland at present, parents can plead “reasonable chastisement” and get away with physical punishment of their children. The UK allows parents to smack or spank their children providing they leave no marks on the body.
Great to be living in or near such civilized countries, isn’t it?

View all posts by Jude Collins →
For God’s sake put on your clothes, Ma’am
1981 papers and Thatcher’s wobble

One Response to Getting physical with the little people