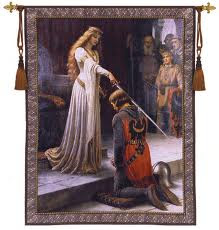 I wonder how many football referees are made knights?  I ask because one thing most football referees are good at is running backwards – occasionally there’s a collision but most manage it perfectly most of the time. Which means being made a knight would be tailor-made for them, since apparently when you get a knighthood, you’re supposed to back your way out of the room. That’s because the room contains Elizabeth Alexandra Mary Saxe-Coburg-Gotha, better known as Queen Elizabeth II. The reasons for the backward movement are rooted in English history. Some have suggested it was because the English monarch was originally a big robber baron, so other smaller robber barons made a point of backing out of a room that contained them to avoid ending with a dagger lodged between their shoulder-blades. This is almost certainly black propaganda. The reverse is more probably true, you might say: people reversed from the room containing the English monarch because turning their back would have been disrespectful, not dangerous. (Although being disrespectful can also be dangerous).
In the south of Ireland, poor people, they do not have a monarch. They have Michael D Higgins which is not quite the same thing.  Which means they are deprived of the New Year’s Honours List that we in the north enjoy.   There is talk down there of inventing an honours list,  and perhaps some fake antique practices to go with it,  like leaving Michael D’s presence while hopping on one foot or doing a leap-frog over the honour-recipient behind you.  Hopelessly fake-sounding, if you ask me. Unlike all the ceremony that surrounds Her Majesty Elizabeth Alexandra Mary, which is steeped in centuries of antique stuff, most of it fashioned to remind people of their place in society. If you  must bow or curtsey or kneel or back your way out of a room, you’d be quite thick not to get the message of who’s important around here.
Besides, even the south hada monarch of its own, it still wouldn’t have an Empire, would it, and that’s really built into our awards.  OBE does not mean Out of Body Experience, it means Officer of the Most Excellent Order of the British Empire. That’s what Darren Clarke got. Rory McIlroy, being younger, had to settle for becoming an MBE – Member of the Most Excellent Order of the British Empire. When Ronnie Flanagan got his thing a few years back for all that good work in the RUC, he became a Knight Commander of the Most Excellent Order of the British Empire. KCB, in short. Not the British Commonwealth, you note. Empire. That brought civilization all over the world.  EMPIRE! HUZZAH!
God, I’m getting misty-eyed and I haven’t even touched a drop yet. Let me end, my dear blog-readers, with a poem from one of our own – Paul Muldoon. A good Ulsterman. It’s called ‘Meeting the British’ and it’s about honouring some North American native people in the seventeeth century with a few well-chosen gifts.  The speaker, of course, is one of the primitive but loveable native people.
We met the British in the dead of winter.
The sky was lavender
and the snow lavender-blue.
I could hear, far below,
the sound of two streams coming together
(both were frozen over)
and, no less strange,
myself calling out in French
across that forest-
clearing. Neither General Jeffrey Amherst
nor Colonel Henry Bouquet
could stomach our willow-tobacco.
As for the unusual
scent when the Colonel shook out his hand-
kerchief: C’est la lavande,
une fleur mauve comme le ciel.
They gave us six fishhooks
and two blankets embroidered with smallpox.
Athbhliain faoi Mhaise Daoibh  –  Happy New Year to everyone.