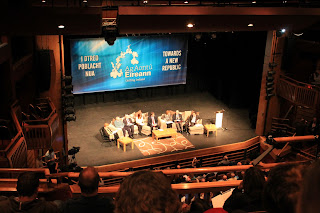 I was in Derry yesterday and caught part of the Uniting Ireland – Towards a New Republic conference organised by Sinn Féin. Actually it wasn’t a conference as I’d have understood it, with different people giving prepared papers over an extended period of time, but it was interesting nonetheless. Some eight people commenting on a new Republic, from a range of perspectives. Several background questions:

1. Why do Sinn Féin organise these conferences? Their opponents might say as window-dressing, to make it appear they’re doing something on the united Ireland front. They would say they’re initiating a debate which is the first step towards a considered assessment of what a united Ireland might look like. I think it’s a mixture of both. Certainly, as I said in an article in last week’s Derry Journal, one problem is that different people have different ideas about what a united Ireland is.

2. Why did they invite Basil McCrea (Ulster Unionist MLA)? The answer to that is totally un-new: to show that they’re open to hearing other viewpoints. Danny Morrison and the ‘West Belfast Talks Back’ section of Feile an Phobail  have been doing that kind of thing for years – inviting in a unionist perspective. It also, of course, throws the ball back into the unionist camp: ‘When are you going to invite one of us to tell you our viewpoint?’

3. Why did Basil McCrea accept the invitation?  Pass. You’d have to ask him himself. At the conference (I’ll try to get a video-clip up later), he sounded more like Sammy Wilson than Basil McCrea. Some people find Basil a bit arrogant; I find him more the bumptious schoolboy. Round face, fringe of hair, never shuts up,  cheerful and friendly. Maybe he went there to stick it to the Shinners. Maybe he went there because he wanted to articulate the unionist case. Or maybe he went there as window-dressing, to make it appear he’s doing something on the Civilised Dialogue front.  Personally, I thought he got a B+ for injecting energy into the discussion, a B- for the content of his contributions, and a D for believing that economics is the only thing that motivates people who believe in a united Ireland.

View all posts by Jude Collins →
Long to reign over us?
Talking about a united Ireland…

One Response to Basil’s Big Day Out in Derry