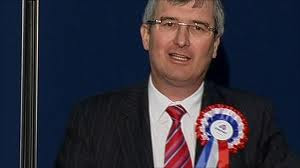 What’s David McNarry up to? He was on TV last night and it’s not often you hear a politician speaking so plainly in public as he did. The unfortunate part, from the UUP’s point of view, was that he was talking about his leader, Tom Elliott. “I feel betrayed by him” McNarry said, or words to that effect. Well you would do, wouldn’t you, if you’d been dumped off your party’s Assembly team, and then Basil McCrea were to leap in  and say that that meant you were ejected from the party itself.

The trouble is, in their heart of hearts, they know it’s impossible. They know they’re in a lift with just one button and it’s marked “Down”.  It’s a long way from Harry West to Tom Elliott, and the UUP would prefer, as they hear ominous lift-whirrings,  to see someone in charge who at least looks the part. Someone with a bit of oomph and character, built on the Boris Johnston lines, say. Which might explain why Basil McCrea was in the Shinners’ lion’s den in Derry on Saturday, cheerfully socking it to them, and why he’s been saying David McNarry should be out of the UUP completely, not just out of the Assembly team.

He’s a lively public-schoolboy-type, is Basil., and he appears to have his twinkly little eye on Big Tom’s job. But why in God’s name would he want it, keeping in mind that one-button lift? Well, maybe Basil has  been thinking of those other two former UUP luminaries, Arlene Foster and  Jeffrey Donaldson. Build up political capital before jumping into the arms of the DUP. What better way for Basil to display his political muscle than by replacing  Big Tom? He might even take a few fellow-members with him when he makes his leap. Whither then the UUP? Ah. In that case think not so much  “Down” button as severed lift-cable.