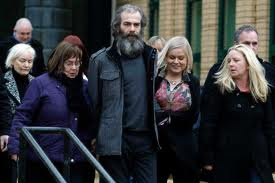 Well, that was a shock result, wasn’t it? All the focus had been on Colin Duffy and not on his co-defendant, Brian Shivers.  Then yesterday, the judge (it was a Diplock, jury-less court) pronounced that Duffy was not guilty and Shivers was, so Duffy went free and Shivers got a life sentence. To complicate matters, Shivers is suffering from a terminal illness.
I don’t know the detail of this case but I was struck by a number of things. The juryless court is one.  They’re necessary, we’re told, to avoid intimidation.  The question is, of whom? Is the argument that if there was a jury, there’d be more people who might be intimidated? What if you were on a jury and you believed passionately in the innocence of those charged with paramilitary attacks – wouldn’t intimidation be counter-productive? And how would those who intimidated you know whether you were arguing for the innocence or guilt of the accused?
The other side of a juryless court is that it’s a judge-deciding court. So the judge becomes judge, jury and executioner, as it were. Is there not something inherently anti-civil rights about that? That one man (they appear to be always men) can determine guilt AND deliver sentence. That’s an awful lot of power to put into one man’s hands. Are our judges such super-beings that we can allow such distilled power to be passed to them? Most of them were previously lawyers, and it’s not unfair to say that most people think most lawyers are ruthless and cunning. They certainly don’t rate highly on our Top Ten moral list.
Then there’s Colin Duffy. This is the third murder charge he has, as they say on the TV reports (which of course are always neutral) “walked away from”. The judge seemed to take a similar view: he conceded there wasn’t evidence enough to convict Duffy but that there were traces of his DNA in the car – the latex glove tip, the buckle of a seat-belt. Duffy’s supporters say the authorities have it in for him and are determined to get him on some charge or other, and they point to a kind of DNA testing which has never been used here before. And of course his previous lawyer, Rosemary Nelson, was killed by loyalists.
The only person who knows whether Duffy is guilty is the man himself and, I suppose, a few intimates. He has always insisted on his innocence, claims he was abused by prison authorities and spent much of his time in prison on a dirty protest. There can be no doubt he cut a striking figure, with his long flowing locks and beard, as he was ushered to a car yesterday after release. It was like the eye of the storm – all around him the churn of supporters and the press, at the centre this tall erect figure looking a bit like an Indian holy man.
There are some people convinced that Duffy is guilty as hell, and the sooner he’s put away for keeps the better. There are others who see him as a heroic figure, persecuted by British authorities because he’s fearless in his republicanism.  Since none of us really knows, whichever of those positions we take may tell more about us than about Duffy.

View all posts by Jude Collins →
How to deal with terrible pain
Eoghan, Aengus, Anne and the Indo too

7 Responses to Colin Duffy and that not-guilty verdict