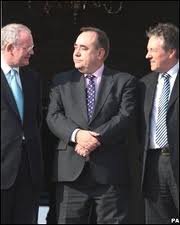 Martin McGuinness may have annoyed a few people this week. And made a few others nervous. And mildly pleased a few more.  Odd,  how the same action can provoke such a range of reactions, isn’t it?
Although McGuinness hasn’t so much acted as hinted that he might one day act.  At some future date he may walk through a door marked “Meet the queen”; for now he’s just nudged the door open a little bit. The Deputy First Minister has said that the visit of QE2 to the south and her demeanour at the Garden of Remembrance and her use of Irish have given him food for thought about meeting her. Or not.
The people likely to be annoyed are those republicans who believe McGuinness and Sinn Féin have sold out and are administering British rule in the north: they’ll see this is just one more step on the road of servitude. The people nervous are those republicans who have stuck with McGuinness and Sinn Féin through all the astonishing changes of the last decade or two,  and who are maybe wobbling just a bit at this latest potential move. The people mildly pleased are the unionists. They’ll see this as confirmation that the man central to the IRA campaign has re-committed himself to conventional  within-the-union politics.
It might be instructive for all three groups to turn their eyes to another man in the public eye at present – Alex Salmond. You’ll  notice that while the leader of the Scottish National Party is happy to put two questions on the Scottish referendum,  one of them will not be should Queen Elizabeth remain head of state for Scotland: “The Queen will be Elizabeth of Scotland in the same way as she is Queen today in Canada, Australia and a host of other Commonwealth nations”.
Now it may be that Salmond has a genuine respect for the queen and believes his fellow-countrymen would be the poorer without her as their head of state. But my guess is that he knows  talking up the un-threatened relationship with QE2 will calm more than a few nervous Scots. When Alex Salmond reassures his fellow-countrymen that while there may not always be an England, there’ll always be a monarch, you may be sure he’s counting  on several thousand votes being added to the independence box.
Angry Irish republicans, of course,  will argue that while Salmond may be using the queen to build a bridge out of the union,  McGuinness is using the same queen as a bridge that takes us deeper into the union.  Nervous republicans will grit their teeth and hope that the Meet-the-queen bridge  isn’t one that leads to the Commonwealth.  Unionists will be pleased by the extent to which these latest words appear to ‘normalise relations’ between Northern Ireland and Britain – within the union.
Actually,  Martin McGuinness’s door-opener  should surprise none of us. It’s totally in line with what has been at the top of Sinn Féin policy for the last fifteen years approximately: to encourage unionists to decommission their suspicion, let go of their siege mentality and consider how much they have in common with the rest of us. Not an easy task and God knows with the likes of Edwin Poots it may take a long time, but then republicans are nothing if not patient. And if some day the man who may by then be the First Minister of Northern Ireland decides to walk through the “Meet the queen” door,  so what?  When Alex Salmond meets her and reaffirms her as head of state, it adds if anything a spring to his step as he swings away and takes another purposeful stride towards a  door marked “Exit”.  You may be sure McGuinness is having similar thoughts.
Personally, though, if Ma’am asks to meet me, I’m going to have to turn her down. No, Ma’am, I’ll say, not tonight. Or any other day or night.  In fact, it’s my conviction that every freedom-loving country   should be working tirelessly for regime change on the big island next door. An unelected head of state, a family that has amassed vast wealth and lives in eye-crossing luxury, the death in mysterious circumstances of a hostile  daughter- in-law, plus Prince Charles’s views on architecture.: if you ask me, NATO tanks should have been sent in years ago.

View all posts by Jude Collins →
Pssst! Want a degree?
Basil’s Big Day Out in Derry

8 Responses to Long to reign over us?