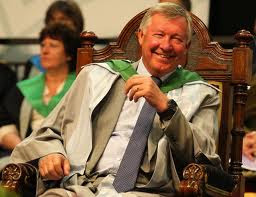 J B Priestley, Philip Larkin, L S Lowry – two writers and a painter whose work it’s impossible not to admire. And, whatever they may have been in the rest of their lives, men with at least one element of good sense and integrity. How so? All three – and over a hundred others – refused the offer of honours from Buckingham Palace. Apparently the royal baubles-givers tried to keep these refusals under wraps, even after the 30-year period of traditional secrecy had passed. Now the cat’s out of the bag and we know who had backbone and who hadn’t. Well done J B, L S and old Phil.
Which brings us to Rory McIlroy. Eh? Great young golfer. GREAT young golfer. Even a non-golf person like myself can see the grace and accuracy of his game. And what about Alex Ferguson. Some manager, eh?  Unrivalled in his achievements with Aberdeen and then Man United. And have you heard Gary Lightbody, eh? Plays with Snow Patrol. Great with the old guitar and voice, I believe.
No quarrel with any of that. But according to today’s Irish Times,  all three are soon to be transformed, transformed utterly. McIlroy and Ferguson in one bound will become Doctors of Science, Lightbody a Doctor of Letters. The University of Ulster, it seems, have found a few spare degrees lying about, so they’ve decided they’ll give them to the three chaps.
Now I can see the University of Ulster or any institution wanting to offer  public applause to the achievements of the three men (although Ferguson is a bit odd, not being from this parish). But degrees? Ordinary people have to study for their degree. For three or four years, and a doctorate could mean about seven. Examinations, assignments, dissertations, viva voces  – it’s  a long, hard slog, and when you get it you feel you’ve deserved it. Done the work, read the books, done the thinking and writing and rewriting. And, these days, you’ll have shelled out up to £50,000. So isn’t it a wee bit odd that a doctorate, which by definition suggests study, should be given to people who probably never cracked a book? Doesn’t it kind of, um, devalue the degree? And all degrees?  The fact is, Rory and old Fergie probably wouldn’t know one end of a test tube from the other, and while Lightbody is  no doubt a good penner of songs, he’d have a hard time getting an A in a postgraduate assignment.
Surely somewhere out there is a sportsman or woman, a singer or an actor who’ll have the guts and common sense to respond to an honorary degree offer and tell the university in question to put it where the monkey put the sixpence.
Footnote: on a related but different topic,  I still haven’t haven’t managed to find a list of all the loyalist ex-prisoners who studied and got Open University degrees. John Kyle says there are loads of them. Some names, John, some names, please.

View all posts by Jude Collins →
The daring somersault of Comhaltas’s Ulster Council
Long to reign over us?

3 Responses to Pssst! Want a degree?