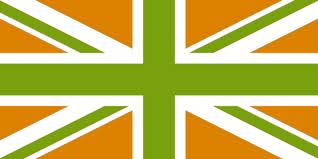 When we speak of a united Ireland, most of us don’t know what we’re talking about.  Or rather, we don’t know what other people are talking about. For some, it means the cold-sweat nightmare of being taken over by the bankrupt south. For others, it’s the prospect of Rome rule paralysing the entire island. For others again, it’s exchanging David Trimble’s  multi-cultural, multi-national, multi-ethnic UK for the monotone strait-jacket of an Irish Republic.
Taken over by the south? God forbid.  Not only does the thought send bad vibrations down unionist spines, it gives thinking republicans and nationalists the collywobbles as well. Partition in Ireland has had the effect of a spade slicing through a worm – the two bits go on wriggling but neither is particularly healthy. The problem isn’t solved by trying to graft the small sick bit onto the bigger sick bit.
Rome rule?  Pu-lease. The Catholic Church in Ireland north and south is on its knees,  not in prayer but near-despair. Even Paisley concedes that Rome rule in Ireland is now strictly bogey-man stuff. As to no longer living in a multi-cultural/national/ethnic society, ten minutes walking through Dublin’s streets  should convince the most die-hard unionist that being Irish today is an identity that’s rich, varied and open.
So much for the negative. What positive reasons can be advanced for the reunification of Ireland?  Step forward Peter Robinson. The First Minister has more than once in recent months  questioned the value of two education systems in the north, which he says divides people and adds enormously to cost. We should seriously and quickly look to greater unity of our educational sevices in the north, he argues.
He has a case. But an even bigger and more total duplication of services is under his nose and ours. Two education systems, two health systems, two justice systems, two police services – you don’t need to be an economist to  see the economic advantages of Irish unity.
But my own belief in a united Ireland is grounded not on the Church, or economics, or even the centuries-old sacrifices of so many for independence. It’s based on the notion of self-respect.
The man next door to me is a pleasant chap. He looks well-off, his life appears well-ordered and he always greets me pleasantly.  But if in some brain-storm he were to enter my house and take over  from me the running of the place,  what then? My guess is he’d do a better job than I do. The wife might even like him more.  More money, more efficiency, more order. But would I let him? Not a chance. That’s because, despite rumours you may hear,  I’m all growed-up. I’m an adult, and a central element of adulthood is that you take charge of your own affairs. Even were others able to do the job better it’s still your life, your home, and self-respect demands that you run both.  Yes, on occasion you’ll make a mess of things,  but it’ll be your mess, no one else’s. Like it or lump it, you must run the show.
If the Irish people are to act in a grown-up way, respect themselves,  they have no alternative but to seek national unity.  Despite all our differences  we’re a distinct, unique people. The English have always known that – when we go over there, we all become paddies. But beware over-reliance on the economic argument. National unity and national governance  ultimately are about something that supersedes economics. When the Germans re-united their country over twenty years ago, they didn’t do it because they thought it would make them wealthier.  They did it, teeth gritted, because they were German and because they were grown-up. North and south, unionist and nationalist,  we are becoming increasingly aware of our Irishness. It’s time for us, north and south, to join in creating a new and healthier national life, a new and better Ireland.

Footnote: You’d rather listen to Basil McCrea on the subject? Fine. Be like that … http://www.youtube.com/watch?v=fRr_NGEtaLQ&feature=youtu.be