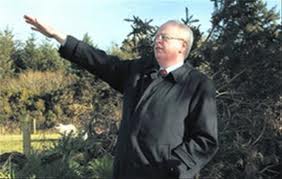 Like me, you probably woke up this morning fretting about how the economic situation north and south would affect the peace process. Good news. Michael McDowell, late of the late Progressive Democratic party, has explained that the down-turn won’t knock the peace process off-course. I’d say Hooray, except then I remember this is the same Michael McDowell who, in the   election declared Gerry Adams to be an economic illiterate. Then about two years later Michael’s own  economic analysis collapsed around his ears. It’s also the same Michael McDowell who warned the people of the south that hidden agents of violent republicanism lurked under the surface in all sorts places – accountancy, medicine, the law –  covert Provos in every profession,  ready to spring from under the bed and up-end the state. It must be getting a bit stuffy down there by now.

But while of course we all miss Michael, his cudgels have been picked up by Pat Rabbite.  You’d think that Pat,being a former Stickie, would be light years away in his thinking from right-wing Michael, but that’s not how the Labour Party in the south operates. Pat, astonishingly, seems to dislike the southern media and quotes McDowell on the subject:

“Our media are stridently demanding to determine the political agenda. They are increasingly trivialising, distorting and denigrating our political process and discourse. While posing as impartial ringmasters, the media are cracking the whip at hapless aspirants for, and holders of, public office who increasingly oblige as performing seals, tamed lions and pirouetting elephants – all in the utterly vain hope of assuaging the hand that holds the media whip”.

Phew. Duffy’s Circus lost a great PR man when Michael went back to the bar after being ejected from politics. Funny thing is, I find myself agreeing with what he says, while at the same time stunned that the criticism is coming from the former Minister for Justice.   Eh? That’s the same media that presented the PDs for years as the guardians of the state’s moral compass? The same media that rejected any question that didn’t have the letters ‘IRA’ in it when interviewing Martin McGuinness during the presidential election campaign? Sorry, Michael. My cat has just run up the curtain and is making a screeching sound that’s a bit like laughter. Must go disentangle him.

One Response to Shock-horror – Michael McDowell doesn’t like the southern media!