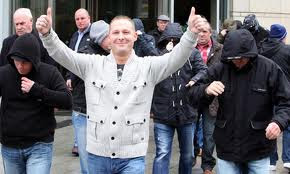 I knew at least one supergrass  – Eamon Collins, who later was killed, very probably by the IRA. Eamon was a likeable man with a hunger for the spotlight and in the end, he bought it at the price of his life. I thought of him yesterday, when the loyalist supergrass trial  collapsed in the High Court in Belfast.
It’s easy to see the supergrass as making his own decision to inform on his former comrades. Certainly Eamon Collins made a calculated decision not only to inform but to ignore the IRA’s warning afterwards that he live south of Dundalk – he had been living in Newry for some time when he was killed. But he and the Stewart brothers, who were the supergrasses at yesterday’s trial, made their decision not just jointly with each other, but jointly with the state. In effect, the state bribed them into informing on their UVF comrades, offering them a hugely lighter sentence in return.
The point I’m making is that the state – the police –  in the past and yesterday dangled a bait for supergrasses to turn state evidence. There’s something instinctive in most of us which recoils at the notion of informing. In Irish history, the word ‘informer’ has a particularly despicable ring. The state could of course argue that the informer is helping them put killers behind bars and in return is deserving of the reward of a much lighter sentence. Another way of looking at it is that the state is bending the law – we know you committed crimes that deserve ten or twenty years in prison, but we’ll let you off with three –  to achieve its ends. And of course when the unhappy informer, as happened in the case of Eamon Collins,  is brutally killed on a cold January morning, the state shakes its head sadly and says it’s a despicable murder. Which adds hypocrisy to law-bending.
I took no satisfaction from the exultant UVF people emerging from court yesterday. They too had turned on a comrade – Tommy English – and killed him, and God knows how many more. But it should have been obvious to the authorities for the past thirty years  that supergrass trials, as well as being morally dubious, inevitably come to an undignified and ultimately bloody conclusion. And it is a conclusion in which the state’s hands are crimson as well.