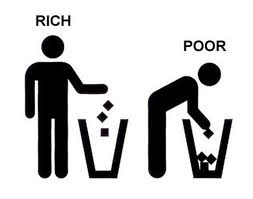 Stunned, that’s what I was. Stunned and disoriented, when I read in this morning’s Indo that thing about better-off people. Like the child in the poem, my parents kept me (or tried to keep me) from children who were rough. It was never quite explained why but I guessed from hints that these people, besides being poor, were likely to be a bit iffy on the moral front. Especially in matters of private property: i.e.,  they  were liable to lift and pocket anything anytime they got a chance. Naturally, that’s the law by which I’ve governed my life – keep a sharp eye on  the less-well-off,  they have no principles because, as George Bernard Shaw says in Pygmalion,  they can’t afford them. Only now this Indo report has turned all that on its head.

According to the paper, psychologists at the University of California in Berkeley have found that better-off people are more likely to lie or side-step the truth in a job interview, more likely to cheat in a game of dice, and more likely to act unethically in the work place. Oh, and when they are driving, they’re more likely to cut across other drivers and less likely to stop for pedestrians.

Can you adam-and-eve it? And here was me, assuming  all the stuff about bankers and property developers was black propaganda driven by the politics of envy.  I’m going to have to lie down in a dark room until the shock of all this wears off.

One Response to The rich are different