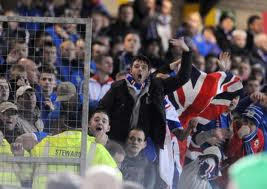 When I was young, I was a bad loser. Really bad. Like Arsene Wenger, I’d feel almost physically sick when I got beaten in a handball game or a push-penny game or a game of football. I remember feeling a sense of absolution – years too late – when I saw the Roy Keane quotation: “Show me a good loser and I’ll show you a loser”.

But I don’t remember lifting bricks and chucking them at the homes of people I thought might be supporters of the guy or guys who’d just beaten me. Nor do I remember peeing in a bottle and chucking that at the opposition. And I certainly don’t remember tearing down fencing and chasing – with my mates, of course – a defenceless director of the opposing team and putting him in fear of his life.

All that happened in Derry’s Brandywell area two nights ago, according to residents. On TV last night was the Derry City director, a man in his forties I’d say, who was close to tears as he told of his terror. In its desire to be even-handed, or show the world through a tit-for-tat lens, the BBC had the PUP’s Billy Hutchinson on, who said that Derry City supporters made sectarian chants and threw stones at the Linfield supporters’ bus, and he’d never go back to Derry again.

What to make of it? Another occasion on which fans from both sides disgraced themselves? That’s one way of looking at it.  But there does seem to be a suggestion – correct me if I’m wrong, I wasn’t there – that the hostilities were not just initiated by Linfield fans, but that their hostility had a vicious edge to it. I can understand the feelings of the supporters of Linfield. You do a round trip of near 150 miles, your team is beaten 3-1 by an old sporting foe – of course you’re going to feel sick. But there’s a difference in feeling sick and terrorising local residents and putting an inoffensive director in fear of his life. Throwing stones at a bus, nasty though it is, pales in comparison. It seems that the spirit of that Windsor Park night in November 1993 hasn’t gone away, you know.

View all posts by Jude Collins →
John Bruton speaks of "misleading". No, seriously.
Fianna Fail and The Lady of Shalott