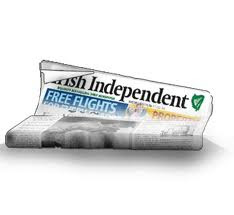 Sometimes you just feel ashamed to be Irish. I was browsing through some old copies of the Irish Independent  the other day and I came on a report of a football game ‘way back between Ireland and Kenya. The report is headed “What? A whining darkie?” It goes on to deal with a complaint made by some Kenyan players that during the game they’d been racially abused by Irish players. The writer is pretty scornful of this (“Only the kikes could give the darkies a run for their money when it comes to complaining”). The Kenyans claimed that some Irish players were “provocative in the extreme” and referred to them, among other things, as “black bastards”. The Indo  commentator can’t see what all the fuss was about:  “Actually, it was perfectly good fun and let’s be honest – who would turn down the chance to annoy someone from Kenya? Interestingly, the Kenyans now seem to be backtracking slightly, having obviously realised that by screaming ‘racism’ they just look like a bunch of tools”.

What’s your reaction – horror? Incredulity? Rage that a piece of dog-dirt like this can appear in a national paper? I’m with you there.

But actually the report wasn’t from an old copy of the Indo, it was from last Monday.  And it wasn’t about an Ireland-Kenya game,  it was about a recent Armagh-Laois Gaelic game. The  heading was “What? A whining nordie?”, and for “kikes” you have to substitute “scousers” and for “black bastards” put in “British bastards”.

So now. Have you changed your mind and do you feel with the writer that it was “perfectly good fun”, since it was only mocking people from the six counties and not Kenyans?

My own consolation comes from the fact that just as not all British people have the same views on black immigrants as Enoch Powell, so too most people in the south don’t have the same view on northerners as the sad little man who scribbled … Sorry, have to stop now. There’s a piece of something stuck to the heel of my shoe and it’s giving off a terrible smell.

View all posts by Jude Collins →
The Mahon Inquiry: the familiar smell of corruption
Enda and Edwin field the questions

8 Responses to Racial abuse and the Indo’s attitude