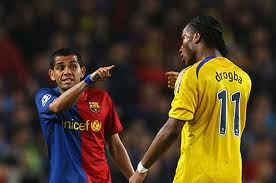 Some game last night, eh?  Barcelona buzzing around the Chelsea goal-mouth the entire game,  Chelsea tackling with every inch of their anatomy, then, on about three occasions lumping the ball upfield and, as in the first game, scoring. I felt about twenty years younger watching it.  Jack Charlton lives. Remember how Jack used to “put them undah pressah” – the “them” being the team playing the Republic of Ireland. As a result, Ireland enjoyed one of its most successful periods in international football.  Everybody, it seemed, loved it – except Eamon Dunphy. Ever the rebel, he pointed out that it was ugly, ugly football. And by and large he was right. It was godawful. But it was effective – it won or drew vital games and the Irish people worshipped Jack. If they could have bought him a lake and given it to him to fish in, they would.
I doubt if Roberto di Matteo will ever reach those heights with Chelsea, but he’s certainly done what few would have thought possible – beaten Barcelona, and last night with only ten men. Ah yes – step forward John Terry. Or JT, as I believe he prefers to be known. The man famous for his alleged sexual goings-on with the former girl-friend of an England colleague and even more famous for allegedly racist abuse of an opponent. For some he epitomises the bull-dog spirit of England – a sort of Churchill in football shorts. To others he’s a vicious London thug with exaggerated notions of his own talent.
So am I glad Chelsea have got to the final? Well yes, especially as Terry will have to watch it from the sidelines, thanks to his knee-in-the-back of a Barcelona player. I admire Chelsea’s never-say-die spirit: if the Republic of Ireland had put on a similar display, we’d say they were every man a hero. But I can’t help thinking that it’s bad for football. Other managers and young players will have watched and will conclude that when it comes to Beauty and the Beast on the football field, the Beauty gets hammered by a sufficiently committed Beast.  Stand by for a resurgence of the bulky centre-forward, the Route One philosophy and the re-emergence of Tommy Smith (remember him?) as a footballing consultant. Oh dear. Looks like the butterfly is going to be broken on the wheel all over again.

One Response to About last night…