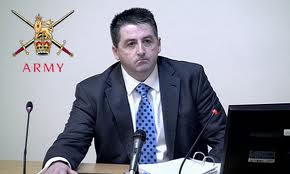 So Jim Allister and Mike Nesbitt are calling on Martin McGuinness to own up to his part in the murder of two senior police officers in 1989.
Five points:
1.    Calling the killing of the two police officers  ‘murder’ means that you believe every deliberate killing during the conflict was murder. Carry on the logic of that and Harry Truman murdered  around 300,000 people (Hiroshima and Nagasaki), and Lyndon Baines Johnson and Richard Nixon murdered between them roughly a  million Vietnamese. If you’re consistent, using ‘murder’ makes sense. If you’re not consistent, it doesn’t.
2.   When you are told something, it’s always a good idea to ask “Sez who?”  In this case, Martin Ingram sez, and he is a former British army intelligence officer who has made a range of statements over the years, some of them very odd. He claims, for example, to be a republican while at the same time maintaining “I would have no problem with 99% of FRU’s activities”. So if Martin Ingram tells you it’s a nice day, you might need to look out your window.
3.   Martin McGuinness was in the IRA, one of the parties to the violent conflict here.  Killing is what happens in violent conflict – people on one side plan ways of and engage in the killing of  people on the other side.  It’s ghastly. It’s  primitive. But that’s what combatants do.
4.    From incidents such as Bloody Sunday, we know that British authorities will use any black propaganda they believe will work. In other words, they’ll lie and lie and lie again. Is there some reason we’ve not been told why Martin Ingram, a British intelligence officer,  should be considered the exception?
5.    Martin McGuinness is, in the polled views of unionists,  the most popular republican leader. They may not like him but they know he’s a strong man who is their best guarantee against growth among the ranks of the dissidents. That’s why  most unionists, who are not stupid, don’t want Ingram’s claims, true or false,  to be blown up into some sort of political crisis.
Sorry, Mr Ingram.  Your day is gone. Here’s your hat.

View all posts by Jude Collins →
About last night…
Tub-thumping