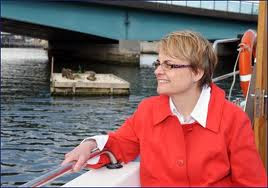 Ah, how we’ve missed you, Maggie! And how good it is to know your voice will soon echo again around the near-empty chamber of the House of Commons.  Dear Maggie Ritchie, erstwhile leader of the SDLP, has tabled a Commons motion in the hope of getting support from other MPs. She clearly means business.
About what? Why, about RTÉ plans to close its London office once the Olympics are over.  That office, she says, has “an illustrious record of service” and has kept Irish viewers informed about British economic, political and cultural life. AND it’s contributed to the peaceful resolution of the Northern Ireland conflict. AND it is “vital to fulfil the vision of future British-Irish relations”/
EH? Here, pull the other one, Maggie. Every time I see Brian O’Connell with his suitably-Anglicized end-consonants coming on-screen, I reach for the remote. But let’s be fair here. Unbeknownst to herself, Maggie has in fact raised an important issue.
Why do we  need Irish reports on things happening elsewhere in the world? The question presents itself particularly on BBC Radio Ulster/Raidio Uladh.  There’ll have been a polished, professional report done by the London BBC on some major story; then RU/RU  will insist on contacting somebody from Newtownards who lives within fifty miles of the event and ask them what they experienced. Why? What has the Newtownards native added to our understanding of the tsunami, or the airplane crash, or the political crisis?
The fact is, we get as much information about what’s going on in Britain as we need from the BBC and ITV  and Channel 4 in London.  If Maggie thinks that except we get an RTÉ angle on things, we’re missing out, she’d want to visit Specsavers. RTÉ’s take on events across the water invariably takes the same line as the British TV networks. An Irish take on events would be another thing entirely. If RTÉ were to report matters from a truly Irish perspective, pointing up the difference between British interests and Irish interests, focusing on the true implications of events for Ireland, then indeed I’d rally to Maggie’s side and urge her on. Unfortunately, neither BBC Northern Ireland nor RTÉ seems capable of thinking for themselves; what we get is a watered-down, more amateurish version of the British report. There is indeed a need for Irish audiences to have an Irish take on British events. But it ain’t going to come through the present RTÉ office in London and it certainly ain’t gonna come from the ‘r’ –softening Brian O’Connell.
Put on the red jacket and go for a walk in one of the Royal Parks instead, Maggie.

8 Responses to Maggie, the mighty defender of RTÉ