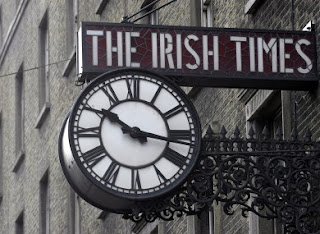 You might say they’re warming up for taking on a post-O’Reilly Indo,  but today’s Irish Times had an article bludgeoning the Lord Mayor of Belfast,  the TD for Louth and the Deputy First Minister at Stormont. The fact that all three happen to be Shinners might lead you to think that the writer had something against Sinn Féin but not necessarily so. He may just be following the mainstream media consensus in Ireland.  Because as I’m sure you’ve noticed, op-ed pieces north and south either avoid the topic of Shinners or use the occasion to sink the boot into the Shinners. If you take a contrary view, I  have a crisp £10 note for the first person who can show me an article from either of the two main newspapers in the south or from any of the three main papers in the north, written over the last six months, which is  positive in its tone about Sinn Féin. And that wasn’t written by a Shinner. All submissions by this time tomorrow, please.

Anyway, back to today’s article in the Paper of Record.  The Lord Mayor of Belfast is criticised for bowing out a week early and not meeting QE2 should she come to the north,  the TD for Louth, aka Gerry Adams, is criticised for referring to the cuts in the south as “Thatcherite,” and the Deputy First Minister, aka Martin McGuinness, is mocked for considering shaking hands with QE2 should she grace our shores with her hard-working presence.

Oh dear. Where do you begin? The possibility that the young Mayor of Belfast has a right NOT to shake QE2’s hand isn’t given an instant’s consideration. The possibility that his bowing out a week early is a plus, leaving the field clear for those who won’t wash their hand for a week after shaking the royal appendage – that’s dismissed as hogwash. The Lord Mayor has done a Bad Thing.

Gerry Adams has done a  Bad Thing too by talking about the cuts in the south being Thatcherite. He should have said neo-liberal, apparently, because Thatcherite is so twentieth-century. Me, I’m not so sure. Ask yourself this: which of the two terms – Thatcherite or neo-liberal –  conjures up the clearer image of full-throttle capitalism and the devil take the hindmost? I think we can safely rest with that dear lady who began her Downing Street residency by quoting a prayer of St Francis  about healing and harmony.

Martin McGuinness hasn’t done a Bad Thing, but he’s sort of thinking  a Bad Thing. He’s hanging back and being vague about wringing the royal hand, as if  he might “spontaneously combust when his republican flesh brushes the royal sleeve.”

So the Mayor is criticised for not doing the handshake with the royal digits, the Deputy Minister is criticised even though he’s said he may well do the hand thing, and Adams is criticised because he thinks the term “Thatcherite” might have some resonance with the Irish people.

We can only hope the 21% of the people in the south who expressed a favourable view on Sinn Féin in the recent poll will now see the error of their ways and write a letter to the Times  telling them the inspiration they are and how sorry they are for saying Yes about those Bad People.