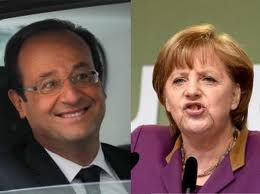 I enjoy elections. I enjoy them so much, I was delighted when the Fianna Fail wheeze of introducing electronic voting machines backfired, leaving them (and the taxpayer, of course) with machinery that couldn’t be used and cost a packet to store.  If we’d had electronic voting in the north, we’d have missed the fun of Fermanagh/South Tyrone last time out, when checking and challenging and nail-biting ended in shoulder-hoisted Michelle Gildernew with the fingers of one hand raised (her majority) and a smile so wide, it practically met at the back of her neck.
Likewise I’ve enjoyed watching the coverage of the recent French election. I don’t think they’ve gone electronic but they sure get their results out quickly.  Not nearly as much nail-biting on this one but it was still a joy to see Nicolas Sarcozy looking as though he’d swallowed a wasp and the new president-elect, Francois Hollande looking like – well more like your local school principal than the new President of France.
Will he make a difference to his country? Will his “C’est Maintenant” turn out to be as limp in the long run as “Yes We Can” in the US? Hollande’s a socialist, which as he said in his victory speech should raise the hearts of those working men and women throughout Europe who are feeling cuts that go to the bone while the fat cats slip off to bask in the sun. On the other hand, Hollande may turn out to be a socialist the way Tony Blair was a socialist. One commentator warned that while Hollande might talk bravely of growth and stimulus for the economy, the reality would prove something different. If there is change, it’ll be at best “incremental and certainly not transformational”. Nearer home that thoughtful economist Eamon (‘It’s Berlin’s way or Labour’s way’) Gilmore has explained that Hollande’s attitude to the Fiscal Treaty and stimulating the economy is exactly what the government in the south of Ireland have been about. Which if true would mean Hollande is already bound hand and foot, a prisoner of Germany and fiscal austerity.
So don’t go getting your hopes up too high, now that Nicolas has collapsed electorally back into the arms of Carla. The reality rarely matches the election rhetoric. I’m glad France chose Francois but I’ll postpone dancing the street for just a little while.
Instead I’ll sit indoors, close my eyes and think very very hard to see can I come up with an answer to a question that’s been plaguing me. It’s this. The EU is a voluntary union of twenty-seven sovereign states, working as equals for their mutual benefit. Right? Then how come we continually see Germany’s Angela Merkel and France’s Sarcozy (now to be replaced by Hollande) explaining what must happen next and why it must happen their way? Maybe while I was out making the tea, the newsreader announced that the EU had elected the leaders of Germany and France as its president and vice-president respectively. A sort of New EU, the way Tony Blair refashioned Labour into the much-loved New Labour. Or put it another way: Europe has become a restaurant, with Germany and France writing the menu and the remaining twenty-five countries in the back kitchen sweating and swearing in an attempt  to keep pace with the demands of the front-of-house maitres-des.
And who are the customers whom we must all strive to please? Why, the markets of course. After Hollande’s election there was much talk of how the markets would react to France and to the austerity-rejecting Greek election. Not to mention the swapsies Russian election, with Putin and Medvedev changing seats. The message coming through was loud and clear: if you don’t elect a leader who is market-friendly, your country’s a dead duck.
But but but. I thought it was the markets that, a few years back, joined hands with the property speculators and the banks to lead us into the toxic mess in which we’re damn-near drowning right now? …Oh, right. I see. I was out making the tea when that was explained as well. Mmmm.