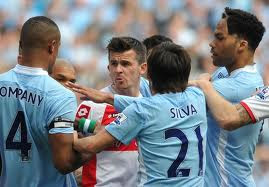 I’ve been trying to decide why I like Joey Barton. I know I shouldn’t. He’s a generally vicious man, if the accounts of him off-field and on are accurate; and his performance in that final game against Man City didn’t cover him in glory. First an elbow in Carlos Tevez’s face, then a kick at the back of Aguero’s leg, then efforts to head-butt  Kompany, and finally an effort to get at Mario Balotelli.  Mr Mayhem, you might well say. And yet and yet.

I think it’s the fact that he’s real that makes me like him. On TV,  it’s all handshakes and playing hard and be a good loser at the end. None of that crap for Joey. Every so often he makes it clear just how he feels. You may be sure Tevez exaggerated that elbow in the face AND he delivered one to Joey first;  that kick didn’t exactly cripple Aguero, as his stunning last-minute goal showed; Joey never did get to  head-butt Kompany and he was never nearer Balotelli than twenty feet. He says he was trying to get one of the Man City team sent off with him when they retaliated (which they didn’t), to even things up, which makes sense if not good sportstmanship. And as for his comments on Alan Shearer and Gary Lineker – wooo-hooo! At last someone has come out and said what the Match of the Day pundits are really like  – boring and sanctimonious and matey to the point where you want to heave into the toilet bowl.  Old Joey just put into words what lots of people were probably thinking, except it would have been a hanging-offence to bad-mouth two such idols of the great British public. And that bit about having better hair AND better shirts on TV than Shearer – looooved it.

Good old Joey – the football world would be a drabber place without him. He’s the real deal.

View all posts by Jude Collins →
Europe – who’s in charge?
Body parts: talk about a cover-up.