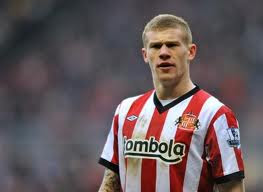 Two interesting soccer-related pieces in today’s Irish Times.  Davy Adams  (a good man, in my experience,  and a good writer) has a go at James McClean, not, mark you, because McClean has chosen to play for the Republic of Ireland, but because of his reasons  for so doing. Davy goes into some detail about McClean saying  that Derry is “a nationalist city, where everybody supports the Republic of Ireland. You’re brought up that way”.  Davy says that’s a wrong thing to say – a “hurtful barb” according to the piece’s headline – when around 18% of the city probably wouldn’t support the Republic. And as for McClean saying “as a Catholic, you don’t really feel at home in the Northern Ireland squad” – well, Davy figures that the IFA “bends over backwards to ensure that Catholic players in particular are made feel welcome”.
Come on, Davy. Give us a break. You know exactly what McClean meant – he meant “All my mates and neighbours and all the people I hung around with and played with – we all supported the Republic”. And you know the IFA is bending over backwards to welcome Catholic players because so many of them, for a range of reasons, are heading south.  If McClean didn’t feel at home in the NI squad – and he did play for them at youth level – there must have been some justification for it.  Maybe check with Neil Lennon?
The second soccer story is about the fact that the Republic of Ireland  team, when they play Italy in the Euros next month, will wear black armbands to commemorate those who died in the Loughinisland massacre. Remember that?  Several UVF gunmen entered the Loughinisland bar, where patrons were watching the Ireland vs Italy game  eighteen years ago to the day,  locked the doors and then went round the bar killing Catholics – six of them, the oldest being 87-year-old Barney Green. The gang knew they’d be Catholics, because they were watching a game involving the Republic.  Nobody was ever charged with the crime, and many of the families of the victims are convinced the RUC investigation destroyed evidence and that there was a strong smell of collusion.
As I say,  Davy is a good man and I like him; but when it comes to soccer and hurtful, he just doesn’t get it.

View all posts by Jude Collins →
Body parts: talk about a cover-up.
Donegal and Angela

9 Responses to On being hurtful