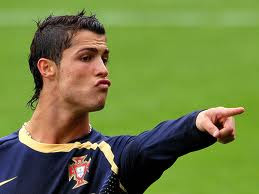 ‘It’s not what happens to you but how you react”:  I think that was one of Maggie Thatcher’s favourite remarks. She herself reacted to being booted out of Downing Street by famously saying  it was a funny old world and leaving with a tear in her eye, a woman clearly nursing the belief that she’d been hard done by.
In football it’s the same. When a team-mate misplaces a pass or doesn’t do just what he wishes,  Portugal’s Christiano Ronaldo tends to throw his arms in the air and glare. I am a genius, you are a fool, why are you making my life difficult? Contrast this with the reaction of Argentina’s Messi, indisputably the greatest player of his generation. When a Barcelona or Argentina pass goes awry, he scurries after it and tries to recover from the mistake of his team-mate. At the heart of true greatness there’s a discernible modesty and respect for others.
Which brings us, inevitably, to the queen’s visit. Writing in Monday’s News Letter in an article headed “Sinn Fein woe sealed with a handshake”, Alex Kane does a kind of victory war-dance around today’s scheduled hand-shake between the queen and the Deputy First Minister.  To Alex,  McGuinness isn’t the Deputy First Minister, he’s merely “Peter Robinson’s side-kick”.  And McGuinness’s party?  “Sinn Fein has been trapped, stuffed and mounted and unionism is stronger today than it has ever been”. The handshake is the final acknowledgement of this stuffing, apparently, “Martin, bless him, is still one of her citizens and subjects. Three cheers, say I!”
What do you think – what has happened to unionism over the past twenty years?  Is it more secure within the UK, now that the Government of Ireland Act has been removed?  Does sharing power with people it once expressed loathing of suggest that those people have been stuffed and mounted?  Does Sinn Féin’s dominance of nationalist politics in the north and increasing strength in the south suggest a party that’s been to the taxidermist? Most important of all: can you imagine Martin McGuinness, Gerry Adams or any of the leading lights of Sinn Féin doing that kind of ya-sucks-boo, thumb-on-nose routine,  in the face of unionism?
Sometimes when you’re feeling uneasy or unsure of your place, there’s a temptation to get shrill and confuse voice volume with strength of argument.  Methinks our Alex doth protest too much.  Bless him.

View all posts by Jude Collins →
Football, royals and unionism
Events, dear boy, and how to ‘analyse’ them

One Response to Doing a victory war-dance: big mistake