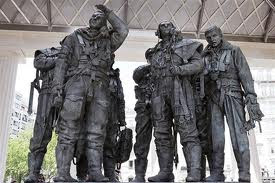 Even though it’s nearly twenty years since the IRA ended its campaign, there are those in the south and the north who still draw back their garments, as it were, when Sinn Féin passes. As did Prince Philip with Martin McGuinness, presumably because he believed that McGuinness was a leading figure in the IRA at the time of the killing of his uncle Louis Mountbatten, along with several innocent people. Tonight on RTÉ, Miriam O’Callaghan will interview Martin McGuinness. You’ll remember that Miriam is famous for her question to McGuinness during his presidential campaign: “Do you go to confession?”
This drawing-back-of-the-garments thing has to do with the moral repugnanace Prince Philip and Miriam and lots of other people feel for the violence involved in armed conflict, especially when innocent lives are taken in the course of that conflict.
Now, follow me to London, if you will. During the week a memorial pavilion was opened in London’s Green  Park by Queen Elizabeth, with her husband Prince Philip in attendance. It features work by an artist called Liam O’Connor and it depicts the bronze figures of a British bomber crew from the Second World War.  It was created to honour the courage of these bomber crews, which had a 50%+ casualty rate of young men killed and seriously wounded during WWII. The strategy for such crews, devised by Sir Arthur ‘Bomber’ Harris, was to carpet-bomb German cities such as Hamburg, Cologne and Dresden. The claim was that this sort of bombing would weaken German morale.  As a result, thousands of German civilians died horrible deaths in firestorms brought on by the raids. Nor were these firestorms an unhappy side-effect of the bombing – the RAF deliberately created them by first dropping incendiaries, then high explosives. The argument was that this would hasten an end to the war – the same reason given for the atom-bombing of Hiroshima and Nagasaki by the Americans.
There are two issues here. One is the justification of these actions on the grounds that they helped hasten the end of war. This is a the-end-justifies-the-means argument and so is morally suspect. It is also based on conjecture – we can’t know whether such actions in fact helped end the war, we can only guess.  The second is that to use this argument and to honour those depicted in these bomber crews stinks of hypocrisy.
The IRA bombing campaign – including the Real IRA’s bombing of Omagh – aimed not to kill civilians, though in several notable cases – Omagh, Enniskillen – it did, killing dozens of innocent people. The bombing raids on Germany and in Japan  were deliberately aimed at killing civilians, and killing them not in their dozens but in their tens of thousands. And yet we have the drawing-aside-of-garments in moral detestation when a former IRA leader passes and statues set in pavilions to honour the courage of bomber crews for killing thousands of civilians.
The taking of human life – any human life – is a terrible thing. But for political and moral leaders to express revulsion at small-scale, often-unintended killing, while building memorials to mass-scale killing always intended, is to display hypocrisy that takes the breath away.