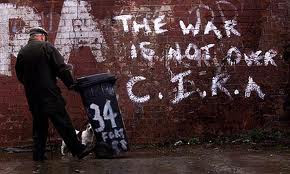 “A sense of belonging and direction”. That and poverty are the two many reasons why young people join republican dissident groups (and now presumably the one group, the IRA), according to Henry McDonald in The Guardian. Mmm. I suspect he’s right, but then a sense of direction and meaning, a sense of belonging is something we all crave. The rest of us find it in other ways (or not at all). These guys find it by joining an organisation with a central policy of killing people. They’re also joining an organisation (as was the case with what we must now call ‘the old IRA’) in which there’s a high chance that they will be killed or end up in prison.

Why? You’d have to be either extremely easily led (highly unlikely) or else you believe (literally to the death) in what you’re doing. In our anxiety to avoid slipping back into the bloody past, there’s a danger that we’ll try to dodge this fact. As we’ll try to dodge the fact that these people fit pretty seamlessly into an age-old, violent struggle against British political and military involvement in Irish affairs. You or I may not be prepared to do this – or it might be the last thing we’d want to do. But these people, be they few or many, do. They think what’s been achieved, through Stormont and cross-border bodies, is a sham, and they’re determined to continue in a traditional physical-force tradition.

Maybe that’s what we should add when we say they’re looking for a sense of direction and meaning in their lives.

View all posts by Jude Collins →
So what do I know?
Talking to the man on the door

13 Responses to Why do people join the IRA?