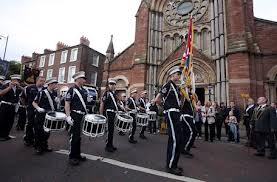 Politicians are good at avoiding the issue, sliding away from under a question and raising another issue entirely. Media people know this, which is why good ones are alert to it and haul the politician, sometimes kicking and screaming, back to the question under consideration.
In the past twenty-four hours, I’ve seen two examples of this slipping-away. On sluggerotoole.com, Mick Fealty, whom I generally respect, wrote a piece about a republican band playing in Dungiven, near to a local Protestant church.  His facts, I assume, were accurate, and it’s not with those that I’m taking issue with. What I am taking issue with – actually am kind of outraged by – is his attempt to present some sort of balance-of-insult. That’s to say, you’re talking about the bandsmen who defied the Parades Commission ban and marched boldly past St Patrick’s Catholic church in Belfast; next minute you’re talking about the republican band playing near the Protestant church in Dungiven. The conclusion to be drawn: one side is as bad as the other.
This morning on Radio Ulster/Raidio Uladh,  Jim Allister was busy using his legal skills to slip away from the questioning of Karen Patterson and draw attention to the republican band in Dungiven. Patterson, to her credit, refused to let him do that, insisting on sticking to the topic of the bands’ defiance of the Parades Commission ban in Belfast.
Does this matter all that much? Doesn’t it make sense to broaden the discussion, so people see that right is not all on one side? The answers are Yes and No respectively. It doesn’t make sense to broaden the discussion, if in fact what you’re doing is slipping away from the issue, not broadening it. And it does matter, a great deal.
The British authorities have been doing the one-side-as-bad-as-the-other thing for decades now, casting themselves in the role of civilized peace-maker among the mad paddies. Worse still, there is a wide middle-class here, unionist/Protestant and nationalist/Catholic,  who like to see themselves as being more civilized, more rational and analytical, than the witless working classes of the Falls and the Shankill. This sense of superiority works only if you can dismiss all sectarian acts, even the Troubles themselves, as the grimy work of the stupid, uneducated masses.  They won’t say this quite as bluntly,  but once you hear the one-side-as-bad-as-the-other argument, you’ll know that the detached middle classes, the Prod in the garden centre and  his/her Catholic equivalent, are busy solving our divisions by allocating equal blame to ‘them’, meaning the unwashed who engage in physical confrontation.
The truth is, one side is  rarely as bad as the other. In this case,  the Loyal Orders are far more guilty of contempt, mockery, sectarianism and defiance of the law than any republican band, in Dungiven or elsewhere.
And if you’re still not convinced, try doing the math, as the Yanks say. How many marches do we have each year from the unionist side and how many from the republican? No, Virginia, one side is NOT as bad as the other.

View all posts by Jude Collins →
Charlie, it looks like you were right
Mitt Romney and that speech