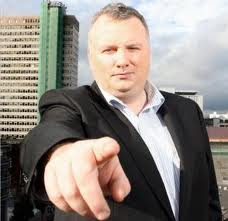 Does violence pay?  That was  one of the questions Stephen Nolan asked Gerry Kelly on TV last night. Gerry chose to answer by pointing out that, regardless of his past – of which he’s never made a secret – he was elected by the mandate of the people who voted for him. This of course dodged the question, the answer to which is “Yes, violence pays if it’s big enough”.. That’s why, in these straitened times, the US last year spent $171 billion on the military, China $143 billion,  Russia a measly $72 million and Britain  a puny $62.7 billion. So yes, Stephen, violence or the threat of violence pays. Wasn’t the signing of the Ulster Covenant essentially that: a threat of violence?
2.     Does being called loyalists demonise a community? Last night Winston Irvine seemed to think the answer is Yes but in fact it’s No. What it does is neatly separate those unionists who don’t live in working-class districts from those who do. That’s not demonizing. That’s what’s called having your cake and eating it. They’re unionists, those working-class loyalists, but they’re not respectable, middle-class unionists like usuns.
3.     Are working-class loyalist/unionist areas more neglected than those in nationalist/republican areas? Despite the plight of those in the Shankill, the answer is No. Chris Donnelly from the Sluggerotoole website last night offered facts and figures which neatly squashed the idea that working-class unionists are getting nathin’, while those in republican working-class districts are on board a gravy-train.
4.     Those Orange bands passing St Patrick’s Church next Saturday: is confining them to playing hymns a reasonable compromise? The answer is No. For the same reason the answer would be No if they’d been given permission to play a selection of Beach Boys numbers. The Nolan programme touched on it and then moved smartly away: it’s fairly common knowledge that some hymns have scurrilous, anti-Catholic lyrics attached to them. Playing them will be an act of provocation to which the Parades Commission has given a green light.
5.     In the light of last night’s announcement, will Orangemen now sit down with residents of republican/nationalist areas and talk about contentious parades?   The answer is No. Not before this coming Saturday, not before next Spring and in some cases never, never, never, never.