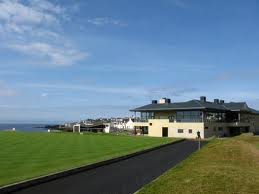 I wonder how many of our MLAs play golf?  My reason for asking will emerge .

Myself and  wife and dearest daughter were up in Portstewart today. Beautiful sunshine, light wind,  the beach as usual broad and generous and clean. “What are those mountains?” someone asked me, pointing into the distance. “That” I said “is a foreign country. That is Donegal”. We thought we could hear faint chants of “Come awwwn Donegaaaaawwwl!” carried on the breeze.

So then we decided it was time for a bit of something to eat, and as we were passing Portstewart Golf Club we thought we’d check if they allowed non-golfers into the restaurant. “No problem” a pleasant young woman told us, so in we go and up some stairs, the present Mrs C in front with daughter, myself bringing up the rear. It was when we were half-way up I heard the cry.

“Take your hat off, sir!”  I stared back down over the banister, and a chap wearing a Portstewart Golf Club top was sort of glaring up at me. “Not allowed to wear hats in the club house!” he called.
And like the craven lackey I am, I pulled my sun-protector hat off and followed the other two into the restaurant.

Ruined my meal, it did. All the time I was forking in the battered cod and mushy peas I was replaying the scene in my head and doing a bit of the old l’esprit de l’escalier  – trying out a number witty responses from myself to the hats-off command, most of them starting with a Wildean “Fuck you, sunshine!”  Mainly, of course, I was mad with myself for having instinctively followed the club-house chap’s order.

So when we finished our meal I defiantly clapped my hat on my head and off we trooped, the two women in the lead once more. As I opened the exit door,  I came face to face with – you’ve guessed it  – a chap in a Portstewart Golf Club top. He was having a smoke so I thought I’d better check first.

“Are you the guy who told me to take off my hat earlier?”

“Because it’s against the rules. If you look you’ll see a big notice ‘No hats to be worn inside the club-house’. It’s up there”.

“It’s the rules. Practically all of the golf clubs have it. No hats in the club-house. You don’t play golf yourself, then?”

“No” I told him. “And I think I’m glad now I never did. I mean, there must be some reason for having that rule”.

The guy shrugged his shoulders. “Haven’t a clue. It’s just the rule”

So we left on reasonably friendly terms, he assuring me that he had made his hats-off request “so you wouldn’t be embarrassed when you went upstairs and somebody got onto you about wearing it”, me assuring him that I wouldn’t have been a bit embarrassed but I was still baffled.

I mean, wtf? WTF? Have my suspicions that all golfers are a bit weird found irrefutable evidence? Do they think their club-house is, like like,  holy ground or something?   Or are they so stupid that they have rules with no reasoning behind them, yet they enforce them because, well, them’s the rules? Are they, as I have from time to time suspected,  an irrational collection of sweater-wearing eejits who dream up daft rituals to go with their birdies and eagles and plus-fours?

So I repeat: I wonder how many of our MLAs play golf?

2 Responses to Golf and madness