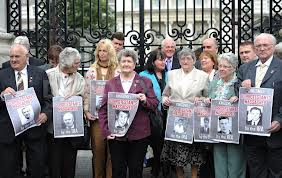 It’s that old apology thing again.  I was on the Nolan Show this morning with Gregory Campbell, discussing Peter Robinson’s call for an apology from Enda Kenny to the families of those who died in the Kingsmill massacre. This really is a very old and painful chestnut.

If the families of those bereaved get solace from an apology, I’d be all for it. Anything that makes their pain more bearable must be welcome. Logically, however, I’ve never understood apologies. David Cameron to the Bloody Sunday families, David Cameron to the Liverpool fans, Tony Blair for An Gorta Mor – the Famine – surely ‘Sorry’ is what you say when you bump against someone on a bus, not when loved ones have been killed. Besides, neither Cameron nor Blair nor Kenny have anything to apologise for – they weren’t responsible for Bloody Sunday/Hillsborough, the Famine or Kingsmill. It makes as much sense as your next door neighbour punching you in the teeth and then you get an apology from me.

But as I say, if an apology makes those affected feel better, by all means give it. But make sure the apologies go to all the victims. The day before the Kingsmill massacre, five Catholics were shot dead (a sixth died a month later) by what was known as the Glenanne gang – a group of loyalist extremists, British soldiers and rogue RUC men. The Pat Finucane Centre research claims the Glenanne gang were behind a total of 87 killings, including the Miami Showband killing, the Reavey and O’Dowd killings a day before Kingsmill, and the Dublin/Monaghan bombings. It’d be important, as I’m sure Peter Robinson appreciates, for apologies to go to the loved ones of those victims too. Especially given the involvement of state forces.