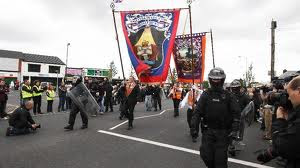 I was on Jeremy Vine’s show on BBC Radio 2 a couple of days ago, with Jim Allister. It was a discussion, as if you hadn’t guessed, about marching. I was all set to raise a key point but fortunately ol’ Jeremy made it for me in his intro: contrary to TV impressions, this isn’t a question of loyalist marching bands vs republican marching bands. The BBC website puts the figure at 95% unionist, 5% nationalist. I think that’s a bit high, but certainly over 75% of marches are unionist marches. So could we have less of the baloney that Jim was busy trying to peddle, that republican marches were as likely to give offence as loyalist bands?  And history tells us that there are not only an awful lot more loyalist marching bands, but that those belonging to the biggest one – the Orange Order – have for a number of centuries now been bringing mayhem in their wake. In fact, between 1823 and 1845, the British government saw fit to ban the Orange Order marches, such was their potential for civic disorder.

Jim, of course, argued that marching was ‘an integral part’ of the unionist/Protestant culture which nationalists/republicans and ‘IRA/Sinn Fein’ was intent on destroying. (You notice what he did there? Implied without saying that you were at least a supporter of ‘IRA/Sinn Fein’ if you thought there was something wrong with 3,500 marches happening here every year, the huge majority of which are aimed at reminding Catholics/nationalists who won in 1690.)

My suggestion was, end  all marches. They’re a daft practice, it’s harder to play a musical instrument when you’re moving than when you’re standing still, and since violence clearly is a product of these marches, cut the marches and you’ll cut the potential for violence. Simplistic? Maybe, but worth trying. If you must celebrate your Orange (i.e., anti-Catholic) culture, do it in one spot. Preferably outside your own front door rather than at the entrance to a Catholic Church. What does marching have to do with culture?

But Jim would have none of it. Marching was ‘integral’. No march, no culture. Calls for an end to marches was to call for an end to Protestant culture. I wonder how it feels to belong to a culture which is totally dependent on a political version of restless legs syndrome?

3 Responses to Jim and me and marches