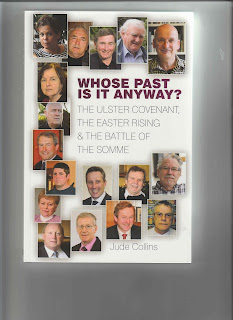 OK – false modesty (in fact even genuine modesty) has never been my strong suit. So this blog is about my book, which is launching in the Linenhall Library at 6.00 pm. Free booze and everyone is welcome. Dr Eamon Phoenix is the guest speaker and he’ll be introduced by the BBC’s William Crawley. I may even stammer out a few words myself.

Meanwhile, I conducted this interview with myself t’other day, which might throw some light on what the book is about.

ME:  I believe you’ve been interviewing people for a book.
ME2: Yes.
ME: What did you interview them about?  Was it about drugs and violence and screaming-tyre car chases?
ME2 : No.  It was about three centenaries – the Signing of  the Ulster Covenant, the Easter Rising and the Battle of the Somme.
ME:  That must have been interesting.  Who did you interview?
ME2: The world and his mother.
ME:  Eh?
ME2:  I interviewed politicians from one side of the house to the other – from the TUV’s Jim Allister, through Ian Paisley Jr and Gregory Campbell, to Mary Lou McDonald and Brian Leeson of eirigi.
ME:  I see. Anybody else?
ME2: Yes, I talked to a number of non-politicians. The journalist Eoghan Harris, the artist Robert Ballagh, the writer Roddy Doyle, Bernadette McAliskey, Danny Morrison and Dame Nuala O’Loan. And lots of others.
ME: Wow!  That’s some collection. What did they say?
ME2: All sorts of everything, really. Ian Paisley Jr told me it was his considered opinion that the Easter Rising was  historically comparable to the Auschwitz death camp and that Patrick Pearse was a lunatic.
ME: You’re kidding.
ME2: Would I tell you a lie? And leave myself open to a libel charge?
ME: What else was said?
ME2: Well, I asked each of the people about their background as well as their opinions, and that was very interesting. The backgrounds I mean.
ME: In what way?
ME2: Well, the fact that Bernadette McAliskey’s father was a strong trade union man and that Jim Allister’s people came from Monaghan.
ME: What’s interesting about that?
ME2: Well, there’s always been a strong strand of socialism running through Bernadette McAliskey’s politics, which might in part be attributable to her father’s influence. Likewise when the Ulster Covenant was signed, all of Ulster was included. When finally partition came, Monaghan was among three Ulster counties left out. That’d leave you with a sense of betrayal.
ME: And?
ME2: Well, Jim Allister feels that the whole cause of unionism has been betrayed with the Good Friday Agreement and power-sharing.
ME: I see what you mean. Any other interesting stuff?
ME2: Loads. Like Eoghan Harris’s ideas on how north and south should work together.
ME: Really? By the way, didn’t you win £1000 off Eoghan Harris? Wasn’t he ready to punch your face in?
ME2:  No, surprisingly. The truth is, he couldn’t have been more helpful. And his interview is one of the best in the book.
ME: So how did he say the north  and south should work together?
ME2: Massive exchanges of people, subsidized by both sides. Hundreds of families from the south holidaying in the north, and vice versa.  And lots of other practical suggestions.
ME: Mmm.  Did the unionist politicians you interviewed not want to punch your face?
ME2: No. Or maybe they did but they didn’t show it. In nearly all cases they were courteous and generous with their time.
ME:  ‘Nearly all cases’. You wouldn’t like to tell us who wasn’t courteous, etc?
ME2: That’s right, I wouldn’t.
ME: Did it take you long to do?
ME2: Over a year of interviews, and most of a year writing them up.
ME: So is the book what they actually said in the interviews?
Me2:  I’ve cut out my questions, but what’s left is 99.9% what the interviewees said.
ME: Are you going to have a launch of this book? What’s it called, by the way?
ME2: It’s called Whose Past Is It Anyway?   And it’ll be launched at the Linenhall Library on Thursday 20 September at 6.00 pm.
ME:  Will important people be there?
ME2:  All sorts, I’d say. The guest speaker is Dr Eamon Phoenix and he will be introduced by the BBC presenter William Crawley. Plus you’ll find the odd MLA mooching about, I’d think.
ME: Can my Auntie Maggie buy your book on the internet?
ME: Of course. Or in any good book-shop. Especially Easons in Belfast. And of course it can be bought at the launch.
ME:Wow!  So about this launch – can I come?
ME2: Definitely. It’s open door – anyone interested is very welcome. And there’s free booze.
ME:  Right. That’s it. See you there. When did you say?
ME2:  The Linenhall Library on this Thursday 20 September – that’s today, btw –  at 6.00 pm.
ME: And free booze! Yee-hah! Thanks loads.
ME2 Failte romhat.

7 Responses to Shameless about centenaries (and a book)