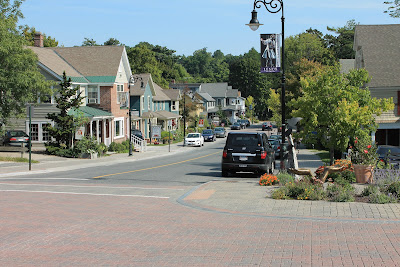 I spent last week in the US and the culture difference, like the heat, hits you immediately. The number-plate on the car I rent at Boston airport had the unnerving slogan ‘Live Free or Die’. I was half-expecting drivers with the same aggressive mind-set on I-90  to Lenox, but no. Traffic is heavy but orderly, there are no sudden switches from lane to lane, and even our modest car is air-conditioned and almost luxurious in its smoothness.
Lenox is a  small town over a hundred miles from Boston and it’s like something from a movie set. A 1950s Jimmy Stewart movie set. Virtually all of the faces are white, the streets are spic-and-span, the library is small and atmospheric, and when I go for a jog in the early morning, a little old lady  yells “Good for you!” as I pass. People sit on benches and chat or doze in the sun; there’s a store called O’Brien’s and an undertaker’s called Roche and the quilt  hung on the wall of the Catholic church carries the names of former parish priests –  Irish in 95% of cases. There’s a real estate agency called ‘Mole and Mole’, which makes me think maybe the movie set I’m in is  The Wind in the Willows  and not Jimmy Stewart after all.
No sign here of the presidential clash that is gathering in noise and intensity throughout the rest of the country. The New York Times  reports bumper stickers which declare ‘O-bum-a’ and ‘I am pro-America, anti-Obama’. The Republican candidate, Mitt Romney at a rally in his home area says ‘Well, nobody ever asked to see my  birth certificate!’, which is music to the ears of that small core of the American electorate who still insist Obama wasn’t born in the US.  Romney later says it was just a joke, we gotta leave some room for humour in this election, guys. Right, Mitt.
Romney rallies often start with ‘Born Free’ by Kid Rock and close with (yep) ‘Born Free’ by Kid Rock; Obama’s begin with ‘City of Blinding Lights’ by U2 and end with ‘We Take Care Of Our Own’  by Bruce Springsteen. Romney attacks Obama with lines like ‘President Obama, bless his heart, has tried to substitute government for free people and it hasn’t worked and it will never work’. Obama replies with lines like ‘They have tried to sell us this trickle-down fairy dust before’.
In Boston on our last evening before coming home, we have a meal with one of my son’s friends, a funny, loveable young man. After a couple of drinks he asks “What do y’all in Europe think of Americans?” I tell him that in my experience they’re generous and courteous,  and that they talk about their emotions  in a way that is often embarrassing. Oh, and that they don’t seem to appreciate that they have an empire, much less appreciate that  whether Romney or Obama win in November,  that empire will continue.
No, no, no, the young man says. Sure,  giant US firms (as well as giant firms from other countries) are in countries throughout the world – in Latin America, Africa and yes, in Ireland. But when they go to such places, extracting oil or gas or creating software,  they give employment, they make a crucial difference by providing employment.  As to regime change and intruding in the affairs of other countries, that too  is often a good thing, he says. An example: Haiti, left to itself,  will continue as a non-democratic, dirt-poor, self-harming state. By trying to build the Haitian economy and its democratic system, the US is a force for good. Left to themselves, countries like Haiti would remain stuck in a swamp of of corruption.
Which of course is the crux of the matter. Is it OK for the US (or Britain, come to that)  to decide that things are in a mess in another country and intervene,  recreating systems closer to its own idea of right? I think not and I tell him why. If you apply the same  principle to the electorate, there are people who should never be let near a polling booth. For example the morons who cavort in front of and/or parade past St Patrick’s church in Belfast: it’s hard to believe that they’ll vote wisely. But alas, that’s what democracy is: the morons must have a say in how things are organized, even if the rest of us think  they shouldn’t be trusted with tying their own shoelaces, let alone voting.
Likewise internationally. There  are people in the US (and Britain) who are convinced that some countries, left to themselves, will never build democratic structures. But for the US or Britain or any other outside power to claim they know better and are doing these benighted people a favour by shaping their affairs is to act imperiously:  we know better so we’ll run the show.  On such thinking the British Empire was built, on such thinking the American empire is built.
‘America – Love It or Leave It’  the bumper stickers used to read back in the 1960s. You can do both, actually.  I do kind of love the US, warts and all,  and we flew out on Monday night.