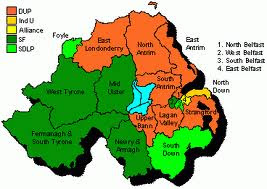 For unionists, the sight of Martin McGuinness at the heart of the North’s government must a pill beyond bitter. Republicans may point to this to emphasise the massive changes that have occurred and how the Orange state has been effectively dismantled. Their goal remains a re-united, independent Ireland. Their problem, however, is how they should regard the state of Northern Ireland in the meantime.
Charlie Haughey famously described the north as a “failed state”, and he was right, in that Northern Ireland could not exist without a huge annual subvention from London. However, exist it does. Sinn Féin now share its government with the DUP and other parties. The problem for republicans is, do they want to see Northern Ireland prosper or perish?
For decades the bombs and killings gave the unambiguous answer: they wanted it to perish. Now that the peace process is firmly in place, what should  republican attitudes be to the state they’re in?
The obvious answer appears to be that they will work in a positive spirit to making the place the best it can be. Partition has damaged north and south not just economically but in all sorts of other ways as well. But given that partition remains in place, republicans appear set on not just healing old wounds but making the northern state as successful on as many fronts as possible.
And therein lies the irony. The more republicans work for the success of this state,  the more (presumably) unionists will come to trust them as co-workers  and old divisions will begin to vanish. However, the more successful the north becomes, the stronger the argument for continued union with Britain. Why fix it if it ain’t broke?
I think there are two answers to that. The first is that success cannot be measured in economic terms alone. Certainly a full belly and a decent job are a necessity for most of us; but it’d be wrong to say that concern for economic success crowds out all other concerns. The recent poll in the south indicates that a sizeable number of southerners would welcome unity, even if that had negative connotations for their own living standard. Man does not live by bread alone, nor woman either. That’s why we shouldn’t be too quick to respond with a dismissive snort when polls are constructed that attempt to measure happiness as distinct from merely economic success.
The second answer has to do with something we Irish are not always good at; self-respect. Were the northern economy prospering, were the material conditions of all the citizens in the north to be comfortable and getting better, it would still be a sad reflection on our immaturity that we depend on an annual hand-out from London and the control of such matters as taxation and foreign policy from that outside source.
With those two matters in mind, maybe there’s less irony than there seems in republicans working towards a better Northern Ireland. This isn’t a peace settlement, it’s a peace process; and it’s not one that aims to stop with a resurgent northern state.

View all posts by Jude Collins →
Me speak Irish? Get real!
Peter Robinson: are you the Captain in disguise?

7 Responses to Are republicans marching in the wrong direction?