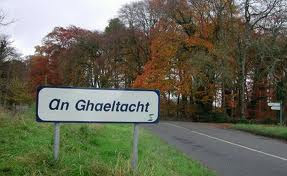 Interesting piece of information in this morning’s Irish Times. It’s headed ‘Most people say they can speak some Irish’, but in the last paragraph it tells us that most people (again, in the twenty-six counties) say they don’t want Irish revived as the main spoken language of the country (by which I presume they once more mean the twenty-six county state).
In between heading and finish, there are some significant pieces of information. For example,  Sinn Féin voters have the lowest proportion capable of speaking some  Irish (admittedly it’s 75 % ) and highest among Fine Gael voters (86%).  You can read all about it at  http://www.irishtimes.com/newspaper/ireland/2012/1128/1224327207177.html
My own moment of epiphany regarding the Irish language came some years ago when I was at a European conference for teacher educators. They were a lively group, keen on establishing contact with one another and keen to find out more about their fellow-Europeans. So this Dutch guy said to me “You – you are English, right?”  I told him no no no, I was Irish. “Big difference there” I told him. “Ah” he said. “I see. And Ireland – is there an Irish language?”  I told him there certainly was, a rich and historical language full of beauty and nuance. “Ah” he said again. “And you can speak it?” Um, er, I’ll get me coat, then.  Here was I, extolling the uniqueness of Ireland, and unlike my interrogator and those around him, I was incapable of speaking even a few coherent sentences in my own language.  I’ve since made stumbling efforts to rectify that short-coming but the memory of my own blindness still stays with me.
It’s not surprising that most people in the south don’t want Irish to be the main working language of Ireland. They clearly see this as meaning that speaking English would be demoted and we’d lose the economic edge that speaking English gives us. There’s little chance of that, I’d say. Besides, those who promote the Irish language do so with the aim of having people equally fluent in both languages.
Does it matter? Isn’t it embarrassing when Gerry Adams speaks his halting, Northern-accented Irish at the start of many speeches? Only if you’ve a prejudice against the Northern accent and you think that it’s better not to speak Irish at all rather than speak it less than perfectly – two fairly sad positions to adopt.
Irish at present is undergoing something of a revival, particularly in the north and, surprisingly, among the Dublin middle-class. And encouragingly, the Irish Times  survey shows young people more likely to be able to speak Irish than their older counterparts.
But to repeat: does it matter? I believe it does, for two reasons. One, consider the whale. A huge, warm-blooded, beautiful creature who plays no necessary part in the lives of nearly all of us. Yet if it were to be announced that whale numbers were declining, that it would be soon extinct, and that it wasn’t worth trying to save it, we’d be appalled. To let all that power and beauty just die! Unthinkable.  The same, only multiplied by 10, goes for the Irish language. It’s too massive and miraculous to even think about letting die.
Tir gan teanga, tir gan anam – a country without a language is a country without a soul? I’m not completely sure of that. But a country with its own language will have a deal more self-respect and self-confidence,  two qualities that we Irish have always struggled with.

View all posts by Jude Collins →
Why 12 December won’t mean much to the Finucanes
Are republicans marching in the wrong direction?

3 Responses to Me speak Irish? Get real!