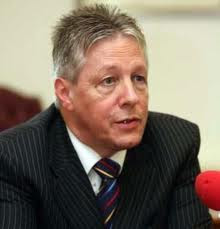 Peter Robinson doesn’t look like Terence O’Neill and he doesn’t sound like him (OK, maybe a smidgen of nasal-tone match) but in his  DUP conference  speech he reminded me of the Captain.
For the benefit of the younger members of our audience, Captain Terence O’Neill was the top man of unionism in the 1960s. Most people remember him for his famous Crossroads speech, of which nobody took a blind bit of notice. Some people remember him for inviting An Taoiseach Sean Lemass,up to Stormont for a cup of tea. Myself, I remember him as the Man Who Visited Convents. One minute, he’d never been near one, next you couldn’t open a newspaper but you’d see Terence  flanked by a set of smiling nuns. No, Virginia, Captain O’Neill was not thinking of converting to Catholicism. He was in those convents in search not of faith but votes.  Catholic votes. Alas, Catholics started demanding civil rights instead and then the balloon went up.
You may wonder why O’Neill wanted Catholic votes.  Hadn’t he more than enough votes from Protestants/unionists? He had.  But maybe the Captain figured the demographics, long-term, were against him.  Or maybe he felt nervous with this large undigested section of the population straining in the opposite direction from him and unionism. You may be sure he wasn’t looking for Catholic votes because he really, really liked Catholics. He wanted their votes because he was convinced it’d be in the interests of unionism.
Which brings us to Peter Robinson’s speech. In it, Peter scoffed at the idea of having a border poll and declared more Catholics than ever before are now happy to remain in the United Kingdom.
Those two statements surprised me, coming from Peter. I’ve always thought of  him as a man of logic.  On the few occasions when he tried making gestures towards the emotional or dramatic,  like wearing an Ulster Resistance beret or breaking windows in Clontibret, he just looked silly. So it baffles me how he could hold those two views in his head simultaneously: (i)  a border poll is laughable and (ii) more Catholics than ever want to stay in the union.
John Taylor,  the greatest leader  unionism never had, used to say the second bit – that lots of Catholics were happy as pigs in muck with the present set-up. But he never added “And a border poll would be ridiculous”.  Peter, in contrast, did.  Which pushes to centre-stage the obvious question: what better time for a unionist to have a border poll than when loads of Catholics are in favour of the union? Think what it’d mean if the union got a resounding Yes from tens of thousands of Catholics: a major – perhaps the major plank in Sinn Féin’s platform would have been sawn clean off.  If I thought like Peter, I’d be yelling “Bring it on, right now!”  And were he to do so, I’d be the first to clap him on the back. Not because I have access to the voting intentions of Catholics ( which Peter appears to have) but because I think we should dealing in realities and not dreams.
For fifty years, successive Irish governments in the south dodged reality, particularly the reality of the border. They gave impressive speeches about the need to strive for the historical goal of a united Ireland, but they never stirred a finger to help achieve that goal. So let’s all, unionist and anti-unionist, try not to sink to that hypocritical level.
Because here’s the thing: a border poll would tell us all where we stood. Peter is confident any referendum on constitutional change would be resoundingly defeated. Maybe he’s right. Or maybe he’s wrong. But if we had the actual wishes of the people, we’d know where we stand. If a majority favours continued union with Britain, then nationalists and republicans will have to go off and have a rethink.   If, however, the poll indicated that Peter was wrong and that a majority of people are in favour of a re-united Ireland, then their wishes, in line with the Good Friday Agreement, will have to be acted on.
One thing’s sure: driving into the future with your headlights switched off isn’t just silly. It’s dangerous.

View all posts by Jude Collins →
Are republicans marching in the wrong direction?
Niall O’Dowd and the view from America

One Response to Peter Robinson: are you the Captain in disguise?