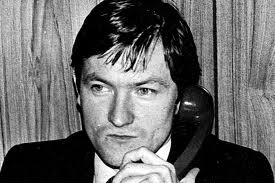 I’ve just listened to two men talking on the radio. One was on BBC Radio Ulster/Raidio Uladh – Jeffrey Donaldson-  and he was talking about the death-threat that he and his family, he says, have received, probably from dissident republicans. If they don’t leave the north of Ireland, the threat says, they will be killed. He says he’s upset about it because naturally he’s concerned for his family.

The other man, interviewed on BBC Radio 4 –  was one of Pat Finucane’s sons – John I think. He was talking about the report to be released today, not about a death-threat to his father but about his father’s murder in front of his wife and children. As you almost certainly know, Pat Finucane was a young lawyer here who was killed by the UDA with acknowledged collusion by British forces. The Finucanes say they will read the report but have little hope for it, since it didn’t involve them and gave no opportunity to interrogate witnesses. As for the British prime minister’s apology, they say he’s got it back to front. First you make clear what events you’re apologizing for, then you apologize. They want a public enquiry.
One obvious difference between the two interviewed men is that while one has received a death threat, the other has been the victim of an executed death-threat ( Pat Finucane was told by prisoners he represented that RUC men had threatened to kill the lawyer). Another difference is that one – Jeffrey Donaldson – is under death-threat from an illegal paramilitary organisation.  Pat Finucane was killed with the willing assistance of state forces – the people whose duty it is to protect citizens. The third difference is that Jeffrey Donaldson appears to be at best ambiguous and at worst rejectionist of a democratic decision arrived at by Belfast City Council. Pat Finucane worked within the law, argued the law on behalf of his clients, accepted the British legal and judicial system here. For that he lost his life. And that’s a big difference.

View all posts by Jude Collins →
Let’s count some sectarian heads, shall we?
Are you Northern Irish?

3 Responses to A tale of two men under threat