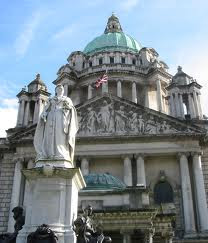 One minute you’re up, next you’re down. Peter Robinson was just hitting that expansive unionism-is-safe-with-us-and-Catholics-are-lining-up-at-our-door note when boom!  Mein gott, donner und blitzen!  What kind of democracy is this, that votes to not have a 365-day flag at City Hall?  This is a crisis, a political tsunami!…Except. Don’t the Chinese have the same word for crisis as for opportunity?  So let’s send out 40,000 flyers and blame the whole thing on Naomi Long!  Perfect. We impress on the Shinners and their fellow-travellers that we’re not going to have Our Flag tampered with and  we fatally undermine your woman Long’s Westminster seat! Great stuff. Get cracking, lads.
So the lads got cracking,  the back of City Hall became a bear-pit of sectarianism and mob rule, and a wee woman stuck her face up to a broken window and made  herself part of a hilarious video that has gone round the world. There will be a cost, of course, and not just for a damaged gate and a broken window.  Foreign firms will turn decidedly frosty at the notion they might want to invest in a place with such obvious nutters in it
Oh dear. How can someone as shrewd as Robinson hatch a plan with  such self-destruct potential? If he’d thought the thing through he’d have known that as soon as you say ‘Demo – back gate of City Hall,’ the rest of the script is already written. Remember when they came baying for Niall O Donnaighle’s blood? Remember the protests against the Anglo-Irish Agreement, with the late George Seawright trying to scramble up the side of the back gate and the air thick with curses and missiles? Peter has lived through all that and yet he didn’t see this coming. Or maybe he thought there’d be a wee bit of violence, which’d put the frighteners on the Shinners and the Stoops and that bloody woman Long’s party.
Certainly limited vision seems to afflict a lot of our unionist fellow-countrymen. Like, hasn’t even one of them noticed how irrevocably, totally and absolutely drenched in Britishness the Belfast City Hall is?  And yet it’s loyalists ( a  loyalist, Virginia, is a unionist with a Rangers scarf round his mouth) who spent the past week burning cars and pelting the police because their identity wasn’t being given clear enough expression.. Maybe go to Specsavers, lads? You get to hoist your flag over City Hall 15 or is it 17 times a year. Nationalists, who are probably now a majority in Belfast, get to hoist their flag over City Hall…um… no times. Never. Never never never. Inside City Hall there are stained glass windows to King William III,  Queen Victoria, the UDR, the RUC,  a bust of Carson, your woman Victoria out front again, all 11 feet of her. And in the city itself – clocks, hospitals, bridges, buildings, hospitals,  all bear the royal name. Belfast is knee-deep in royal and imperial memorials. So remind me again: whose identity is getting a hard time here?
Most shameful of all is that disorder arose because  nationalists and republicans engaged in a democratic act of decision-making.  Remember when unionists used to lecture republicans about following the democratic political path?  Last week they did just that, as they voted in Belfast City Hall. Their reward? See above re burning cars, missiles at cops, demented screeches of ‘No surrender!’  A police officer in her car has a petrol bomb thrown inside it. Peter says ‘suspend’ rather than ‘stop’, because ‘stop’ would make him a tyrant.  And the census figures now suggest that in ten years’ time, taigs will be in a majority in the state. That is, if they don’t join the DUP, which Peter is confident a lot will want to do. Or should that be ‘was confident’?

View all posts by Jude Collins →
Are you Northern Irish?
Five questions after Connecticut shootings