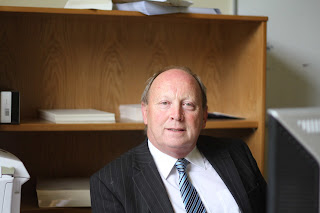 I’m surprised by the number of people who’ve asked me, after my interview with him, “What’s Jim Allister like?”  Want the truth? OK. I found Jim Allister courteous, witty and the kind of guy you might like to, if not to have a beer with, at least a glass of good wine. Not that there were any signs of wine or strong liquor of any kind when I interviewed him in his office at Stormont.
His parents came from County Monaghan  – one of the three Ulster counties left behind, so to say, when Ireland was partitioned.  That and the fact that both parents were “quite robust and strong” in their unionism probably, he says, played a part in shaping his own political views. Have those views changed over time? Well, he tells me, his enthusiasm for devolution has waned in no uncertain manner, due to the kind of devolution he sees here in the North.
When we talk about the signing of the Ulster Covenant, he brings it quickly round to the present day. And he’s more than critical of his fellow-unionists.
“They have settled for incredible propositions. We’re supposed to be an integral part of the United Kingdom but we’re not allowed to change our government, we’re not allowed to have an opposition. In fact we must have in government those whose organisations set about murdering and butchering us. As of right! These seem to me light years away from the principles that underscored the Ulster Covenant. I think if you were to say to anyone who signed the Ulster Covenant in 1912 that, a hundred years hence, manifestation of those whose politics you fear will be effectively ruling over you, as of right, and you will not be allowed to have an opposition against them, and you’ll not be allowed to put them out of government or change your government – they would say ‘That’s not what we’re signing the Ulster Covenant for, it’s the very antithesis of what we’re signing the Ulster Covenant for’ ”.
He had a great-uncle –  his father’s uncle – who died at the Somme, so he believes tribute should be paid to his sacrifice and that of so many more.
“I wouldn’t want to see the Battle of the Somme or any other anniversary hijacked for the politics of the day. We’ve seen that so much, in the selling of the Belfast Agreement, from Bono and John Hume and all the rest in the Waterfront Hall, and every bandwagon being used to sell the latest political message. I don’t want to see a solemn occasion like remembering the Battle of the Somme being turned into a political circus. If the people in the Republic feel enthused to celebrate and mark those who donned the British uniform, then that’s a welcome thing. But my fear is, if you start massaging commemorations for political purposes, then they lose their real purpose. Joint celebration? There’ll be celebrations open to everyone. Just as joining the British Army was open to everyone, and thankfully many of both persuasions did join it. So I don’t think you have to go about and create some sort of artificial ambience for all of this. Either there is something there worth celebrating or there isn’t.”
I’ve saved the tricky one of the three centenaries  – the Easter Rising – for last. How does he see a commemoration of Easter 1916 panning out.
“I have no doubt that already, from the Sinn Féin direction, just as they turn the Hunger Strike commemorations into big political events for their own political advantage, that there will be every attempt on their part to celebrate those whey would see, in their terms, as their forefathers in the rebellion they have engaged in. To an extent they are entitled to do that as they wish. But likewise don’t let them patronise me or ram it down my throat – or rewrite history or recreate them as some sort of heroes.  In my book they were rebels taking the opportunity, as the IRA often did, of Britain’s extremity, to pursue a course of rebellion.  And I don’t want it sanitised and changed beyond the truth of what it was. They’re not going to persuade me that those who took over the GPO did the right thing and that they were anything other than how I’ve described them. If they killed in pursuit of their aim then yes, of course they were murderers, because they weren’t regular troops, acting under the protection of a state of war.”
He concedes that centenary commemorations could increase division between people here but he believes certain occasions demand a response.
“I think a nation who forgets its history loses its soul.I mean, what is it that makes any nation what they are? It’s the War of Independence and the Civil War, among other things. Now no one suggests to an American that in the interests of the overall collegiate good we should forget about all that, we shouldn’t celebrate any of that or mark any of that.  Likewise no one should suggest to me as a unionist that iconic historic events should not be marked in the way that they deserve, in deference to some nebulous thing which is called progress”.
You could call Jim Allister a thorn in the DUP’s side, a throw-back, a fundamentalist. One thing you couldn’t call him is mealy-mouthed. With Jim Allister, what you see is what you get.  You may not like it but as he sees it, that’s your problem, not his.

[ In case someone hasn’t already twigged: this is an edited version of my interview with Jim Allister in my book ‘Whose Past Is It Anyway?’  Contact me if your bad local book shop hasn’t stocked it and I’ll sort you…]

View all posts by Jude Collins →
Checking the mirror
Och sure, it’s only 100 masked men

5 Responses to Gentleman Jim speaks out