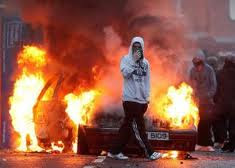 I read a tweet yesterday. “Just passed around 100 masked men heading towards city centre”.  The city centre in question was, of course, Belfast. Imagine if the tweet had referred to Dublin or Cork or Liverpool or Manchester – do you think there wouldn’t have been uproar?  If policemen had been hospitalized, if politicians had been behind the appearance of such people on the streets, if  the gate leading into the city hall had been damaged,  if death-threats had been issued against a city councillor and an MP  – would it not have been top story in every radio and TV report, the main headline in every paper? You betcha. But because it’s here,  the British and Irish media give it space, but not really very much. The response, presumably, is “Oh, those crazy Irish, at it again!”.
I heard Danny Morrison and Alex Kane on radio today, discussing the civil disorder and why it had occurred. Alex at one point said words to the effect “I’ll be meeting people from my community after this broadcast and they’ll say ‘Oh, I heard you getting very pally with that Morrison on the wireless!  And no doubt you’ll get the same – ‘Oh I heard you getting very pally with that Kane’ ”.  Danny Morrison corrected him and said that he, Morrison, would actually get no such reaction. In short,  any attempt to make it one-lot’s-as-bad-as-the-other is bogus.
Take the facts of the matter: the City Council debates an issue,  then votes. They conclude by arriving at a half-way house: some flying of the Union flag some of the time, but no flying of the Union flag all the time. Sounds reasonable. Although  if you were really into tit-for-tat, you’d maybe want to balance the fifteen days that the Union flag will fly at City Hall (15) against the number of days the tricolour will fly at City Hall (0). – but that was never even considered. Even though the flag given allegiance by nationalists and republicans doesn’t enter the debate, even though Belfast City Hall continues stuffed with royalty and British reminders, even though the decision was a perfect example of local democracy in action,  you’ll still hear straight-faced commentators blaming the City Council for having raised the issue.  In this way the people who adhered to the democratic process are condemned, leaving the car-burning mobs of masked men as, well, a response to provocation.
Where have i heard that before? Ah yes – the Troubles. The IRA started the Troubles, loyalist paramilitarism was simply a response to that. Despite the fact that the first innocent civilians were killed by Gusty Spence and his gang, the first policeman to die was killed during loyalist rioting.
A favourite claim of some unionist politicians  to words of republican politicians is to talk of ‘the mask slipping‘. So what would you say about those who send out thousands of leaflets calling for protest, naming an individual politician who isn’t even a city councillor, and then go into hand-wringing mode when the called-out demonstrators start to issue death-threats and wreak havoc?
You can try to cook this one whatever way you like, but the unavoidable truth come through: the mask of some unionist politicians has dropped  and what is revealed is not a pretty picture.