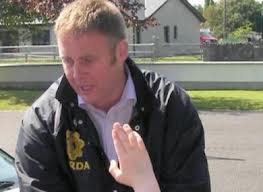 OK – let me get the this bit out of the way. I shouldn’t have to say it but there are people with overheated imaginations who tend to see what they want to see rather than what is written.
The recent shooting dead of garda detective Adrian Donohoe was a cruel and vile action. He evidently was not just a good garda officer, doing his job at the time of his death; he was a husband and father, a coach of local GAA youngsters, a man held in high regard by all in the area where he lived and worked.  It is good to know that Justice Minister Alan Shatter – and others – have said that no effort will be spared to bring his killer to justice. President Michael D Higgins has described the killing as a dreadful crime, one which all Irish people will be appalled by. Taoiseach Enda Kenny said the murder was outrageous, an appalling act of cold-blooded violence.  Former Justice Minister Michael McDowell has said “Revulsion towards this crime and its perpetrators is universal”.
I went to see the film Lincoln, starring Daniel Day-Lewis,  yesterday.  (No, I haven’t changed the subject. Hang in there.) In the course of the film, there is a vote  in the House of Representatives to give black slaves their freedom and equality before the law. A great many in Lincoln’s own Republican party were opposed to this bill, but it squeaked through: it gave equal rights before  the law to people – black people – whom even some of Abe Lincoln’s own party  saw as innately inferior.
Back to present-day Ireland. Last month a man called Christopher Warren was shot dead in Dublin. He was a known criminal with links to drugs gangs. Last year in the south of Ireland there were sixteen gun murders linked to drugs gangs. Can you name any of the victims? Did the President and the Taoiseach express their disgust at the killings? No. Why not? Because these were ‘drugs-related’ murders – people ‘known to the garda’  – i.e., criminals from the drugs world.
There’s a part of us that says “Well, the more they kill each other, the fewer drug-pushers in our society”.  That’s true. There’s also less respect for the law. The murder of a good man like Adrian Donohoe should be no more heinous in the eyes of the law than the murder of Christopher Warren or any other drugs-related criminal. If we’re going to measure the goodness or badness of people before deciding how wrong their murder is, we’re effectively saying that Justice isn’t really blind – she’s actually peeking to check the moral worth of the person murdered. Wrong, wrong, wrong. The most contemptible criminal has the right to the same protection under the law as the most dedicated member of the Garda Siochana. President Higgins and Taoiseach Kenny don’t say “They got what was coming to them” but by their indignation only when a good man is murdered, they imply a distinction. There isn’t.
By the way, when did we get to the stage where we accepted the existence of death-dealing drugs gangs as, well, hey, part of life, you know? Was it during the tenure as Justice Minister Michael McDowell who is now outraged by Adrian Donohoe’s death?
I’ve a feeling there’s a terrible irony in there somewhere but I can’t quite put my finger on it.    Maybe you can.

5 Responses to Garda Adrian Donohoe: death of a good man