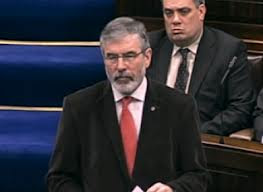 I’m just off air from the Nolan show where I was discussing with Gregory Campbell and another individual (whose name I missed) the apology that Gerry Adams offered in the Dail for the killing of garda Jerry McCabe. It wasn’t a discussion that got very far but it did raise a number of issues that bear further consideration.

View all posts by Jude Collins →
Seamus Heaney: political seer?
We get the politicians we deserve. And the police too?

5 Responses to Gerry Adams and that apology