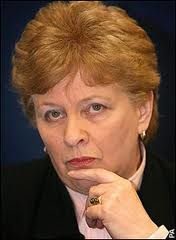 [This is an edited version of  the interview in my stunningly readable book Whose Past Is It Anyway?]
I  know Nuala O’Loan by reputation. She’s the woman who ran a slide-rule over collusion here, she’s the woman who reduced former Chief Constable Ronnie Flanagan to a hysterical blob. So picture my relief when I  visit her house and find her to be soft-spoken and friendly.  Maybe it’s because I’m not a Chief Constable. Yet.
She grew up in Yorkshire. Her father died when she was thirteen, so the family emphasis was on survival rather than politics. When she married her husband Declan and moved here, she soon got inducted into our labyrinthine ways.
“My first introduction to the politics of Northern Ireland, I remember, was sharing an office with some people who kept asking me which school I went to. I kept telling them I went to a girls’ school, a boarding school – I’d various answers for them. So I said to Declan ‘They just keep coming back and asking me which school’.  Declan said ‘Just tell them it was a convent and that’ll solve the problem’. And it did!”
She believes the 1912 Covenant could be construed as being anti-Catholic, and so celebrating it might be seen as denigrating a part of the community. “I think in a way that’s why the Twelfth marches can never be celebrated by Catholics; it’s what lies behind – and not just what lies behind, but what the people who are celebrating think they’re celebrating, which may be a different thing from what they’re actually celebrating”. That said, she believes the centenary of the Ulster Covenant signing could lead to greater understanding, if discussed in small groups rather than with marches and grand occasions. “You could argue that 1912 is responsible for everything that followed. I wouldn’t put the blame on the unionist people for what has followed; I’m just saying that that act of separation which followed the Ulster Covenant was the key to everything.”
In terms of the 1916 commemorations, she sees how the people of the south would want to celebrate the corner-stone of their state’s creation. But for unionists in the north, “1916 in a way consolidated the fears that the unionists had, and the separation then of the six counties was almost inevitable”.  She believes that northern nationalists will want to use the centenary to confirm their national identity. “I had a view of 1916 which was informed by the books I’d read to date. But I’ve seen more and more recently that questions whether 1916 had to happen at all, questions what actually did happen. So I’d like to learn more about it and maybe there are others who’d like to learn more about it”.  In fact she sees both the Covenant and Easter 1916 as learning points. “It would be more creative and more enriching if, rather than deepening a sense of nationalism and unionism, you were able to deepen a sense of the other’s understanding of history, to a point where you were able to accept the other in a better way, to move forward as a society. I think that would be the best outcome”.
She has a particular interest in the commemoration of the Somme. Her grandfather was in the British army. “He joined from Dublin in the early 1900s, probably for economic reasons. He survived the First World War but was badly wounded. So maybe I come from a slightly coloured understanding of why the Somme should not be divisive. I also have a nephew who lost a leg at the age of eighteen fighting in Iraq, having walked out of school to help the Iraqi people be free, and suffered terrible injuries. I have another nephew who’s currently in the army and will go to Afghanistan again. So maybe my colours are sort of prejudiced there. All those young men fed over the wires into the machine guns, knowing what was going to happen to them, living in those trenches in the dirt and the water and the rats…No, I feel very strongly that war is such an obscenity.”
She believes that north and south have common links to the Somme commemorations which they do not have to 1916 or 1912 commemorations. That said, there will be “some people, because of the connotations of the British Army in Northern Ireland, they will disengage from it, they will not want to be engaged. But I will be very surprised if there is any attempt to disrupt it or anything like that”.
The fact that she comes from an academic background perhaps explains the emphasis she places on the study of these historical events rather than the unquestioning celebration or even commemoration of them.
“I think these centenaries are an opportunity for learning.  There are a lot of people trying to ensure that this time is used positively and creatively. There will be inevitable incursions into boggy ground, but we have so much to battle at the moment, in terms of our economic recession and the social difficulties we have, that our energies should be concentrated on the positive rather than anything else”.
I remember at the time of the interview mentally agreeing that economic problems do indeed loom so large in people’s lives, and  the memories of the Troubles still fresh and raw, using these centenaries for anything other than enhanced mutual understanding would be unthinkable. But then, I interviewed  Dame Nuala O’Loan some eighteen months before the flag protest. How little any of us knows what’s around the corner.