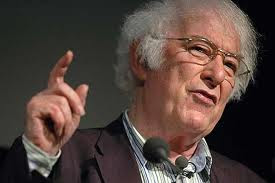 Political predictions made by individuals are, by and large, a  waste of  time.   I can think of only  two that later events proved accurate. One was  by Gerry Kelly  who  predicted that  the TUV had peaked at a time when most people, myself included, thought  they were a growing threat. A week or two later Gerry was proved conclusively right  while the rest of us tried to wipe the egg off our faces. The other  was when I made a bet  with Eoghan Harris about  the fate of Sinn Féin candidates in a twenty-six -counties election that was four years away.  (Eoghan, who to his  credit stumped up, told me I’d got lucky.  Maybe he was right.)   So you’ll  understand if I don’t clap my hands to my head and run off shrieking,  now that Seamus  Heaney has predicted  there’ll never be a united Ireland.

I’m  not clear if he was asked a direct question about  the subject  in  the interview he did for  The Times, or whether he just came up with it.  But I found myself thinking about  a man I used to work with who was an outstanding practitioner of  drama in education.  He said that he found people had begun to ask him questions, not just about drama, but about  other things. Like climate change. Or vegetarianism. Or animal rights. He said he couldn’t figure out the jump  in logic people made, from his expertise in drama to his assumed expertise in  all these other areas.

I also thought of Sam McAughtry, a man whose  views I wouldn’t share on a  number of subjects. Sam wrote an article once about his time in  the Civil Service, I think it was.   The main thrust was that his superiors at work, because they were  his work superiors, tended to assume superiority on any topic that  came up in a discussion.  Sam saw no sense in this and used treat their  ideas with no more respect than he’d give to that of someone he’d encountered in a pub.  His work superiors didn’t like this lack of deference and it got him into some bother over the years.

Seamus Heaney is a fine poet. But I’m baffled as to what part of his poetic imagination allows him to predict so firmly the never-never-never-never of a united Ireland.  Or,  for that matter,  quite what he means when he says “Loyalism, or unionism, or Protestantism, or whatever you want to call it, in Northern Ireland it operates not as a class system but a caste system. And they [the loyalists] have an entitlement factor running:  the flag is part of it”.  If he means that loyalist protesters believe they’re entitled to do whatever they want and to have the Union flag fly as often as they like, he’s right.  If he’s saying  “And they should be granted their  wish, because they have an entitlement factor”, he’s talking through his Nobel  armpit. Loyalists/unionists/whatever have no entitlement to reject a democratic decision reached by the city councillors in a democratic vote.  To talk about people   having  some sort of dispensation from democracy is to side with those  who, because they’ve done what they felt like doing for so long, think it entitles them to keep on doing whatever they like.

When Seamus and I were pupils in St Columb’s College, Derry in the 1950s,  unionism  saw itself as entitled to gerrymander and discriminate at will,  and the  nationalist population shrugged its shoulders in resignation. I  hope this doesn’t come as too big of a shock, Seamus, so I’ll whisper it gently: up here, we’ve stopped shrugging.