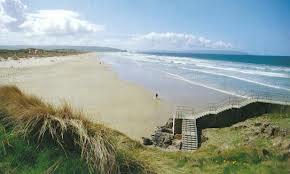 OK – no politics today. Well, sort of but not full frontal politics.
A year or so ago I found myself in what some geographical illiterates call  ‘the North-West’ – in Portstewart, to be exact. Up for the day, a nice walk along that fabulous beach, a bit of lunch. Now as you maybe know I think golf is a dumb game but I’ve no objection to their club-houses as somewhere to get a bite to eat, especially Portstewart Golf Club which has a nice view of that amazing beach.  Anyway I was inside and heading up the stairs to the restaurant when I heard a loud voice from below calling “Remove the hat, sir!” I looked down and it was an official-looking chap staring up at me. “No hats to be worn in the club-house” he informed me. As one easily over-awed by authority, I immediately plucked off my sun protector and went and had my meal. But with every biteful I kept kicking myself for my compliance and wondering why on earth they had this rule. So on the way out I put my hat defiantly in place and headed for the exit, and there was the chap who had demanded my hat-removal. So I asked him why the rule. “It’s the policy here, sir”.  Yes I know, but why? After a couple of more versions of ‘It’s the policy here’, he confessed that he hadn’t a clue but he was under instructions.
That was some time ago, and I’m old enough and ugly enough not to let these things bother me. But a case I heard of recently has made my blood simmer if not boil. A family group went for a meal in Portstewart Golf Club restaurant. As it happened a young boy in the family suffers from alopecia – his head is totally without hair, and so he habitually wears a cap.  No sooner were they in Portstewart Golf Club than the official was on the spot telling the youngster to remove his cap, adding by way of explanation “For the ladies”. So the boy, who is understandably attached to his hat in emotional as well as physical ways, was forced to remove it. Alopecia on view.
Now I don’t blame the guy who carries out this dumbest of club-house rules-  he’s following orders and probably glad of the job. I do blame the nineteenth-century ninnies who devised the rule and who appear to believe that respectability has something to do with taking off your hat on their holy ground. And who, in implementing that rule, show all the flexibility and sensitivity of a rhinoceros’s arse.  Is there some reason these people  would rather bully a vulnerable child into compliance than use the space between their ears where other people have a brain? Maybe you can think of one. I can’t.

View all posts by Jude Collins →
Malachi, me and that movie
Concern with bread-and-butter. Oh, and flags too.

3 Responses to Looking for something stupid and cack-handed? Try Portstewart