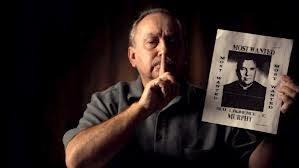 I’m just back from a debate (?) on  BBC Raidio Uladh/Radio Ulster’s Sunday Sequence. My sparring partner was Malachi O’Doherty, who is a good example of someone whom I like but whose opinions on most things I disagree with. This time we were disagreeing about the film Mea Maxima Culpa, which is (or certainly was) showing at the Queen’s Film Theatre.

The film is about a Father Laurence Murphy of Miwaukee, who abused a group of deaf children in his care over a  number of years. Some of the boys, now elderly men,  told their story through sign language, with actors doing a voice-over. There was something truly chilling about the little gasps the men made and the slap of their hands as they signed the story of their suffering. The film brings to life yet another shameful episode of clerical sexual abuse of children and the arrogance of some of those in power in the Catholic Church at the time (1960s/70s).

Where I part way with Malachi is over the fact that the film presented the Catholic Church as a uniquely corrupt institution from top to bottom, with corruption allowed unchecked and its lay members held in check by the threat of damnation. This is simply untrue. To take the Murphy case (two other cases featured as well), the film notes that in 1974 some boys from the home went to the police and then the District Attorney’s office with their complaint against Murphy. So too did Fr Thomas Brundage, the judicial vicar for the Archdiocese of Milwaukee. The film notes the fact that the boys went to the civil authorities and were ignored, and leaves it at that.  It doesn’t follow-up on this failure by the civil authorities, which could have stopped Murphy and his abuse in its tracks. Nor does it mention that Brundage contacted the District Attorney’s office with his concern. Nor does it mention Brundage’s claim that many of the other boys from the home not featured in the film contacted him and expressed their gratitude for his efforts on their behalf.

The other point of difference that I have is a wider one, and one rarely referred to. The film overall gives the impression of an institution, the Catholic Church, which is peculiarly prone to the crime of sexual abuse. This is not the case. Figures on this matter are hard to come by, and when you ask for them you are sometimes greeted with hostility. I recall a UTV programme a few years back, in which I was one of the audience. The panel was a group of experts, including Dame Nuala O’Loan  (and my apologies that I can’t recall other people). I asked the panel if anyone knew how the level of clerical sexual abuse in the Catholic Church compared with the level of abuse in other faiths and in the general population.  No one could or would give me an answer. Immediately following the programme, I was approached by three Protestant clergymen – two Presbyterian, I think, and one Church of Ireland. They admonished me sharply for daring to raise such an issue – the problem was one unique to the Catholic Church, they explained, because of the rule of celibacy for priests. When I asked for some research that would support this claim, I was told it was unnecessary – they knew it was so.

In fact there are some figures. A study from Stanford University scored the incidence of Catholic clergy sexual abuse over the second half of the twentieth century at somewhere between 2-5% of clergy. The rate of child sexual abuse in the general population is about 8%. The US Department of Education reported that nearly 10% of students in Grades 8-11 had reported incidents of sexual misconduct by teachers.  Yet none of this has prompted attention or investigation from the media.

It would be safe to say that most people believe with my Protestant clergymen that child sexual abuse is unique to the Catholic Church, as is cover-up of these crimes by the Church. Films like Mea Maxima Culpa  go a long way to reinforcing this impression. Which prompts the question ‘Why?’ Perhaps it’s lazy journalism. Or maybe it makes a better story to set child abuse exclusively within the the Catholic Church – all that stuff about crucifixes and confession and candles and the rest. Or maybe it’s a plain old-fashioned desire to put the boot into the Catholic Church. There are people in our society who made their names doing just that.

If the Jimmy Savile scandal inflicted suffering on untold numbers of vulnerable children, it also did one good thing. It showed that widespread sexual abuse of children and minors isn’t confined to the Catholic Church and that other institutions do just what often happened in the Catholic Church: they experienced child sexual abuse and they tried try to cover it up for as long as possible. Mea Maxima Culpa brings alive real suffering and baffling evil. The existence of such suffering and evil to an equal or greater extent in other areas, it ignores.

But don’t take my word for it. Newseek  in 2010 quoted Ernie Allen,  president of the National Center for Missing and Exploted Children in the US: “I can tell you without hesitation that we have seen cases in many religious settings, from traveling evangelists to mainstream ministers to rabbis and others”,

Not many people know that. Some don’t want to.

View all posts by Jude Collins →
An interview with Davy Adams
Looking for something stupid and cack-handed? Try Portstewart

9 Responses to Malachi, me and that movie