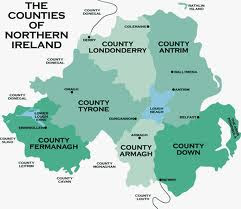 Maybe it’s because it’s still February (how long, Lord? How long?) and the weather’s turned cold, but I find myself this Wednesday morning thinking grimly as to what bright spark came up with the wheeze of including ‘Northern Irish’ as a category in the census forms. Because it clearly is placed with exquisite precision as a middle ground in which, if you’re of a delicate disposition,  you can park yourself. British? Nah – that’s for the head-bangers who get pissed on the Twelfth and love getting into sectarian punch-ups.    Irish? Nah – that’s for the crazies who tried to bomb a million Protestants into a united Ireland and failed. I’m not going to link myself with that  lot. Which leaves me with Northern Irish and sure what could be better? By ticking that box I show I’m not an extremist on either side, but view this wee country of ours, all six counties of it, as the gem that gets my affection-juices flowing.
Some people don’t like me for it? Makes it sound as though I’m inching away from my Britishness and next you know there’ll be a tricolour flying over Belfast City Hall? Too bad. Some other people don’t like it, because it sounds as though I’m trying to hew out an identity that is peculiar to here  – that I’m answering Thatcher’s question and saying no, we here are not as British as Finchley but at the same time we’re not those muddle-headed bankrupts south of the border either? Too bad there too.
A long time ago, when the Ulster Unionist Party was just beginning to feel the DUP pinch its bum, they devised a slogan “Decent people vote for the UUP”. That’s really what the Northern Irish people are saying: We’re decent balanced people, we see our Irishness but we also see our Britishness, and what’s wrong with that?
Well nothing really. It’s just another way of saying “I’m a unionist but a nice, liberal one. And I’m pleased to say that some very decent people – including Catholic people, for goodness’ sake – think like me”.
What was it the Bible said about this sort of thing? Ah yes, Revelations 3:16: “So then because thou art lukewarm, and neither cold nor hot, I will spue thee out of my mouth”. “

View all posts by Jude Collins →
Concern with bread-and-butter. Oh, and flags too.
Three things about the lolly we get from London