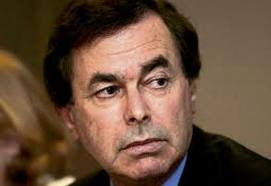 The south’s Minister for Justice, Alan Shatter, has a soft voice and an ego as big as the Ritz. When four representatives of the Association of Garda Sergeants and Inspectors ( AGSI) walked out on him at their conference, he said he was glad he hadn’t brought his wife, presumably since she was even more sensitive to the “discourtesy” of the garda representatives than he is.
AGSI president Tim Galvin sees things a bit differently. With more than a hundred garda stations closed last month, he said to Shatter: “You told us the lack of consultation in relation to the first series of closures would not be repeated and that we would be updated and kept informed. Twelve months on nothing has changed. Your words were lies”.
And wouldn’t you know it: power sucks up to power. Garda Commissioner Martin Callinan has expressed his outrage at the “discourtesty” to Shatter and there’s talk of tough disciplining of the four representatives who walked out.
All this bluster, of course, is to put the frighteners on the upcoming conference of rank-and-file gardaí who are traditionally more militant than the AGSI. We can only pray that they tell Shatter where to put his umbrage.

View all posts by Jude Collins →
Of starfish, masochism and a final call
President Obama: should we listen but not see?

3 Responses to Alan Shatter, his wife and some gardaí