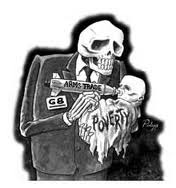 Psst – care to buy a gun? No?  Just as well, actually, as I don’t have one for sale. But I know
where you can get one. And much, much more.
Because arms sales is a massive business which brings in ( wait for it) $1.000 billion
annually. Hold that thought for a second. If they suspended sales for a year and took the
money that would have gone into weaponry, they could solve the deficit problem for dozens
of countries at a stroke. But that’s not going to happen.
So what death-dealing kind of weapons get sold and by whom? Well, you’re spoiled for
choice. If you’ve got the money you can get  not just guns but light, medium, and heavy
tanks; self-propelled artillery; self-propelled assault guns, guided missile patrol boats, fighter
and bomber aircraft that can go at speeds above Mach 1, helicopters, surface-to-air missiles,
surface-to-surface missiles and anti-ship missiles such as the Harpoon, the Silkworm, the
Styx and last though far from least, that old faithful from the Falklands days, the Exocet.
That’s a lot of death-dealing weaponry. So who’s doing all the selling of this gear? Well, surprise, surprise, the United State of America leads the field. Odd, eh? The US spends a lot of time worrying about the build-up in arms throughout the world, and from time to time has to send its soldiers to fight and die in places like Iraq and Afghanistan; yet it’s top of the league by a country mile in the sale of death-dealing weaponry of all kinds. After the US we get Russia, coming in with a measly 17%, France with 8% and the UK with 5%. At least, that’s what a report for Congress said last year. To its anxiety, there are signs that UK sales are slipping. Talk about incompetence –  Cameron’s coalition can’t even keep up with selling instruments of death.
Who buys all this stuff? Well, 39% is sold to developing countries. You heard me. Countries which could well do with food or financial support or decent infrastructure get instead weapons with which to kill each other or their neighbours. Next up after that we get that fine democracy Saudi Arabia, which accounts for 21%. The United Arab Emirates gets a measly 6%, India 13%.
You see the pattern. Where Western interests are strongest ( that is, where there’s oil), the US and others happily set the arms sales cash register ker-chinging, and please just forget all that mealy-mouthed nonsense about democracy and human rights. If you or I were to sell so much as a revolver and were caught, we’d be bunged into jail;  the US and the UK can sell hundred of millions worth and nobody says a peep. And should anyone complain, there’s always an MP or some such to point out that jobs would be lost if the arms trade was curtailed. And of course sales go to countries that should instead be spending on building the national infrastructure and feeding its people. But hey, if you’re going to go into the weapons business, go into it big-time and you’ll stay safe.
And of course there’s nothing teaches like example.  That rocket-launcher seized in Derry a few weeks back came from Russia with love. The people who planned to use it must have felt considerable moral encouragement when and if they looked at the arms sales enthusiasm of the countries which mouth the make-peace  mantra. When big bucks are at stake, morality goes to the wall.

View all posts by Jude Collins →
Cardinal Napier: it’s good to talk
Victims of the Troubles: should they decide the punishment?

10 Responses to Can I interest you in some quality Death?