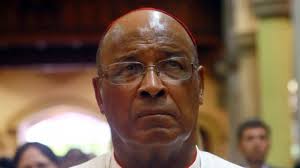 There are certain trigger words that drive people wild – their wits go out and reflex responses set in. This weekend and this morning Stephen Nolan’s radio show was knee-deep in trigger words. What words? “Catholic clergy sexual abuse”. Stephen did an interview with Cardinal Wilfred Napier of South Africa, in which the cardinal raised the question of whether paedophilia is simply a crime or whether it’s a psychological illness of which the paedophile is himself a victim.
That question hasn’t been answered, or if it has been I haven’t come across it. If I am in control of my actions, I must be held responsible for them. If I am not in control of my actions, I cannot be held responsible for them. The nearest – but imperfect – parallel I can think of is alcoholism. Some believe alcoholism is a disease and requires treatment – the alcoholic is in the grip of something he can’t control. Others believe an alcoholic is a drunk who chooses to abuse himself and often others and should be punished.
Cardinal Napier went on to say that someone who was abused and then went on to abuse is at least partially not responsible for their actions. I’m more dubious about that – in fact I’d disagree with him, certainly if he’s suggesting that when  a person has been abused it’s inevitable that they go on to abuse. There are a lot of people who’ve been abused who don’t  go on to abuse, so that notion of the inevitable repeat of the crime falls down. I suspect the cardinal was trying to indicate that past experience can shape future experience. That’s certainly true. But the inevitability bit doesn’t stand up.
So. I look forward – among people who are prepared to deal with the subject in a rational way –  to discussion of this crime-or-condition issue, with expert opinion being fed in. Victims should be part of this discussion but we should keep in mind that because they have been wounded so deeply, it will be harder for them to deal with the subject dispassionately, which is what it needs.
One other matter related to child sexual abuse that’s not been addressed and should be: is the level of abuse among Catholic clergy higher than in other Churches or religions, or in the wider community? Put bluntly, is your child more likely to be abused by a Catholic priest than they are by a minister, a rabbi, a scout master or their uncle? Ugly, yes, but for that very reason in need of some facts and figures.

View all posts by Jude Collins →
A night with David Norris
Can I interest you in some quality Death?