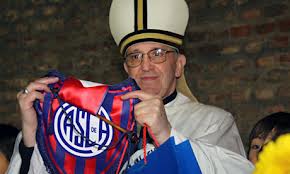 The bit I liked best was when they announced – in Latin – the name of the new Pope and everyone in St Peter’s Square, including the media, sat with their lower jaws hanging. Who’d he say? Who he? I love it when the experts are found clothes-less.

So what else is there to be cheerful about this papal election?  Here’s a few.
1. It was almost mind-bending to see the amount of space and time – non-critical – that was spent on the retirement of Benedict, the run-up to the election, the election and its aftermath. Normally the media follow “Catholic Church” with “clerical sexual abuse”, as though abuse were confined to the Catholic Church. Refreshing, I’d say.
2.  The new man – it seems odd to be saying ‘Francis’ – is a Jesuit, which in my book is one up for him. Certainly in Ireland, and historically, Jesuits have been fearless and selfless, by and large. If you want a good example, check out Peter McVerry. They’ve also a reputation for being smart, which is nice.
3. From what we’re told, he’s a man who’s a bit impatient with pomp and splendour. Let’s hope he carries that into his papacy. It’s a bit hard to think of Christ’s top man on earth, his Vicar/Viceroy, surrounded by riches and splendour, when the Man Himself was the polar opposite.
4.  He’s from South America, which is a place I know little about (as anyone will tell you, and sometimes me); but it’s far, far away from the Roman Curia and that can’t be bad. It’ll make it easier, I hope, for Francis to bash a few heads together and let them know fings ain’t going to be wot they used to be.  I hope.
5. He’s Argentinian – or is that ‘an Argentine’? – which will add an interesting little wrinkle to the Falklands/Malvinas story. I was briefly on the Nolan Show this morning and Stephen asked me…well for a moment I wasn’t quite sure what he was asking me. Then it turned out to be a question – I think – about the fact that Francis might be on the side of Argentina in the Malvinas question. Cheesh. I live thousands of miles from Argentina and I’m on the side of Argentina. Francis is from  there.
But anyway, let’s hope the media at least give him a honeymoon period, if that’s the kind of term I should use for a celibate Pope. I guess it’s just a question of time before some commentators start demanding to know why he didn’t lead an assault on dictators Bignone and Galtieri, but for now there’s a definitely positive air within the Catholic Church. And it’s been a long time since that was the case.

12 Responses to End of ‘No Pope there’