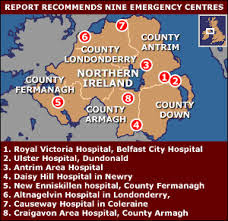 Maybe you saw it. It was on BBC Newsline 6.30, I think, some days ago: a map showing how the proposed development of hospital provision would look here in the north. The suggestion seemed to be that hospitals would consist of a series of central hospitals, like the RVH and Altnagelvin, with satellite hospitals linked to them.
Two of these hospitals caught my eye: Altnagelvin and the one in Fermanagh. Why? Because they were so close to the border. Clearly the Health Minister has in mind organising things so that the best care is available to people in the north through careful planning of provision. Fair enough – nothing makes more sense. You have to have your development and provision in the place where sick people need it.
But for the greater part – in fact almost entirely – the concern is with people living in our little northern statelet only. There are exceptions – for example the radiotherapy unit in Derry also serves patients in Donegal and Sligo. But by and large the north plans for the provision of health services to people north of the border, the south to people south of the border. Where facilities are shared, as in Derry, it’s on an ad-hoc basis. In other words, the isolated case is so blindingly obvious, it’s accepted.
Imagine if you had two businessmen working in the same village, offering the same service. From time to time it’d be glaringly obvious that co-operation would allow them to secure a contract that, acting alone, they never could secure. What would the businessmen, if they had half a brain, sit down and do? They’d map a strategy, looking at possibilities for working together over the next ten years, say, and they’d build their businesses with this co-operation-to-mutual-benefit built into it.  They wouldn’t wait for the opportunity to come up and bite them in the bum, galvanising them into action. They’d have foreseen or even created opportunities by joint planning.
Is that happening now? I’m open to correction but I very much doubt it. Edwin Poots is fearful of what his electorate might say if he got too close to the Health Service in the south and was seen to be planning medium and long-term provision, as distinct from immediate needs. In fact our health service in the north is built as though we were exactly like the rest of the UK. We’re not. For a start there’s a large body of water lies between us and them, making the journey to avail of services across that water daunting. The obvious logic is that more attention – planned, long-term attention – needs to be paid to using and developing all of the health facilities on this island. Sick people don’t give a damn if something doesn’t look well politically speaking. They just want the best provision.  And a major part of that is, how easy is it to get to the treatment. Right now we’re wearing blinkers – or rather the two health departments are wearing blinkers – that allow them to see only that which is directly beneath their noses. I bet  Edwin Poots’s party doesn’t do its political planning in such a perversely purblind way.

View all posts by Jude Collins →
Victims of the Troubles: should they decide the punishment?
Learning Irish: talk about pointless